It’s February, and the Sochi 2014 Winter Olympics start this week! With many events in 15 different sports, this year’s games look to be very exciting. Taking place in Vancouver, the 2010 winter games were much closer to home for U.S. athletes than this year’s trek all the way to Russia.
Take a look at some of AEI’s featured speakers who competed in previous Winter Olympic Games.

Angela Ruggiero
Angela is a four-time Olympic medalist and defense-man for the U.S. Women’s hockey team. She is also the President of the Women’s Sports Foundation. She was voted USA Women’s Player of the Year in 2003 and 2004, as well as the #1 female hockey player in the world by The Hockey News in 2003. Ruggiero is one of this year’s U.S. delegates on the International Olympic Committee.
Read more about Angela Ruggiero or book her for an event here.
Bonnie Blair

Bonnie is a six-time Olympic medalist and U.S. Speed Skater. She was The Associated Press’ Female Athlete of the Year in 1994. She is also the most decorated female athlete in Winter Olympics history, and was nominated to the United States Olympic Hall of Fame in 2004.
Read more about Bonnie Blair or book her for an event here. 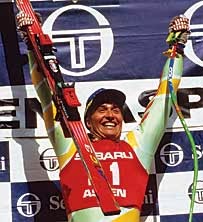 Cary Mullen
Cary is a two-time Winter Olympian Alpine skier, and was leader of the U.S. National Ski Team for over a decade. He retired from skiing in November 2000 to relax (and work) on the beaches of Mexico, but he is on the board of directors for the National Olympic Development Association. Mullen’s focuses as a speaker are success strategies of high performers.
Read more about Cary Mullen or book him for an event here.
Let the Games begin!
For more information on all of our speakers, please visit us at AEISpeakers.com and follow us on Facebook and Twitter!