Daniel Trust and How to Honor LGBTQ Month 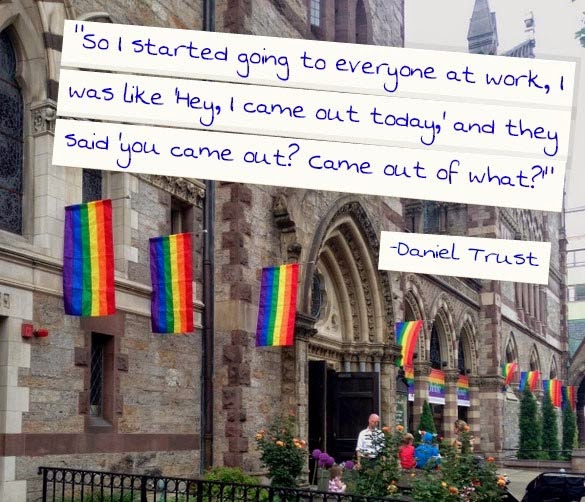 “So I started going to everyone at work, I was like ‘Hey, I came out today,’ and they said ‘you came out? Came out of what?’”
With humor and a calm demeanor, Daniel Trust recalls the day he came out to his peers at work, on National Coming Out Day.

A man who is both a survivor of the Rwandan genocide and active in the LGBTQ community represents the continuing struggle for rights and acceptance both in the United States and abroad.

He recalls how in Rwanda, homosexuality is a taboo. If one is found out, he or she is killed. He came to the United States still afraid.

Meanwhile, in the United States and abroad, there are still split opinions on the issue. The United States continues to debate the religious morals regarding homosexuality, while legalization across the 50 states proceeds. Despite the progress, children and adults across the country according to news stories and online confessionals, still find themselves rejected by families after coming out, increasing fear among closeted individuals.

Others explore their sexuality to figure out more about who they are. The less confusion one harbors about their own identity, the healthier one’s relationships with their peers and career become.

Athletes and audiences also famously protested the anti-gay laws during the Sochi Olympics.  There are still many more countries, cities and towns where homosexuality is taboo, where people are killed or silenced. However, those around the globe and far too many rom-coms prove, love cannot be killed.

Also from abroad, British diver Tom Daley came out though confusing people by being in a relationship with a man, but “still fancying girls.” He shows the capacity of love an individual can feel towards another, regardless of gender, more commonly known as bisexuality.

Public straight allies have shown support too. Actress Patty Duke became an ordained minister to help oversee marriages among LGBTQ couples, a year after playing a woman in a lesbian relationship on Glee. She said online “As an ordained minister I want to marry all the gay couples in our country.” It is safe to say that so much good has come out of so many different individuals.

Similar to the legal versus cultural issues of acceptance, there are still ways to go to further promote such tolerance and love.

Daniel Trust, is one such example of an excellent representative, continuing to promote human rights of a US Citizen, Rwandan Citizen, and a member of the LGBTQ community.

With continued legalization for gay marriage, the issue has no longer become solely about recognition but about accepting people for who they are, especially with increased awareness and understanding of bi and pansexuality which loves more than one gender, and for transgendered and intersexed individuals. Hate crimes against such individuals continue and are coming more to the surface.

Far more people are still afraid to come out or acknowledge who they are to themselves, their families and friends. Daniel Trust mentions that without a support system, LGBTQ individuals are more likely to commit suicide than heterosexuals. One measure that has been taken is awareness through the month of June now celebrated as LGBTQ month.

The month of June celebrates pride for who one is, who they love, and their gender identity. Gay pride parades occur all over the country. Articles about tolerance and acceptance continue to trend online, and there are opportunities for all people, gay or straight, to show support for people and those they care about.