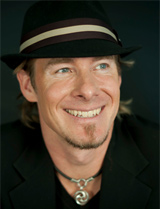 When most people hear the name Erik Wahl, they think of an artist, mogul, speaker, author. But there is one category that continues to set Wahl apart from all others – his philanthropy.
Wahl served an eight year partnership with a corporate company. After losing his job, he decided to quit the rat race and turn to his true passion – art. He began crafting fantastic graffiti paintings in minutes. His act became widely known, Wahl began selling his art in galleries and to private owners.
Nowadays, that’s not the case. Wahl has changed his path of life yet again, now turning to philanthropy. Wahl now chooses to not sell his art in galleries or on the commercial market. He donates his art to charities that commission him, where his art is then auctioned off. This started as a gesture 10 years ago, and has now become a staple in Wahl’s work. The Wahl Group has estimated that they have raised over $1,500,000 for charities through their art donations.

In 2012, Wahl painted Marylin Monroe in three minutes. The painting was bought by singer Pink for $10,000. The proceeds made by the painting were donated to Linda’s Voice, a foundation that focuses on spreading awareness and ending domestic abuse internationally.

In 2013, Wahl donated his painting of Lady Liberty to the One Fund, a foundation created to help the victims of the Boston Bombings. His painting was auctioned off and made $10,500 for the charity.

According to his website, Wahl has stated, “I know it sounds crazy, but I have never wanted to sell or commoditize my art. The payout has never been about dollars, but about making an impact on the world. I am delighted that the art has raised good money for great causes.”

Other than making art to donate, Wahl spends his time doing speaking engagements. His painting demonstration and his ability to speak from both the business and art worlds helps him to communicate to a vast variety of people.

Stay tuned for Wahl’s second book, due out soon!