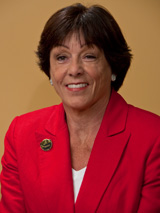 We at AEI Speakers would like to take the time to recognize another one of our fantastic exclusive speakers: Karen Daley.

Daley, a Massachusetts native, spent 25 years practicing as a clinical nurse in the ER at Brigham and Women’s Hospital in Boston.

Nursing was, and still is, a passion for Daley. In 1998, her time on the job was interrupted. While disposing of a needle, she was struck and injected in her index finger by a protruding needle in the sharps container. She had been struck three or four times before this, it was a seemingly common occurrence around the hospital. Only a few months after this incident, Daley got the devastating news that she was infected with both HIV and Hepatitis C, forever ending her career as a nurse.

Daley did not allow these setbacks to stop her. Instead, she has devoted her time to making sure needle stick injuries do not happen to anyone else. In 1999, she used her influence to successfully assist in the passing of a needle stick safety and prevention bill in Massachusetts. She earned her doctorate from Boston College in 2010. During her studies, she focused on the emotional turmoil within nurses who have suffered needle stick injuries. She now spends her time traveling the country, telling her story and spreading advocacy on needle stick injury prevention and other healthcare professional issues.