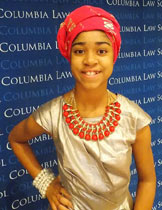 Zuriel Oduwole, 12, met with President Alpha Conde of Guinea on Nigerian Children’s Day, May 28th 2015. President Conde came to Nigeria to attend the 2015 Presidential inauguration that took place the next day. During their conversation, the two discussed youth education in Guinea, challenges faced by a post-Ebola Guinea, and the development and future possibilities of Guinea.

President Conde is the 15th World leader Oduwole has interviewed.  She works across the African Continent to bring prominence and change to issues surrounding girls’ education. Oduwole lives in California, the place of her birth. Oduwole’s Nigerian and Mauritian parents home school her at their home.

Youth education and the Ebola crisis are passionate topics for Oduwole. In 2013, she started her “Dream Up, Speak Up”, project which aims to inspire children around the globe to dream and have high intentions. This past year, Oduwole launched a children’s hand sanitizer campaign to fight the then-spreading epidemic.
Oduwole shared her excitement about meeting President Conde over Twitter:

Oduwole is the youngest commercial film maker in the world, already having written and produced four documentaries focusing on African issues. In 2013, at age 10, she became the youngest person ever to be featured in Forbes Magazine. Elle Magazine named her as one of the “33 Women Who Changed the World in 2014”.
This past April, Oduwole spoke at Columbia University’s annual African Economic Forum. Watch her speech here:
For more information on all of our speakers, please visit us at AEISpeakers.com and follow us on Facebook and Twitter!