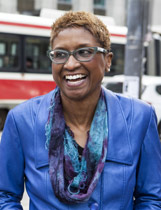 AEI Speaker Paula Boggs brings new meaning to the phrase game changer.
Boggs was one of the first women to be congressionally appointed to the U.S. Navel Academy. Boggs served eight years as a regular officer in the United States Army, earning her airborne wings while doing so. After realizing she was not quite ready for active duty, Boggs changed direction. She received a Bachelor’s degree from John Hopkins University, and later graduated from the University of California Berkley’s school of Law.
Upon graduation, Boggs headed into a 14-year career in public service. The political scene became her playground. Boggs worked in the department of defense, in the office of legal council, served as the attorney for the U.S. Army and the assistant U.S. attorney among other duties.
Boggs then turned her attention to the private sector. She invested her time wisely, working with Dell as their V.P. of legal, and as a partner at the law firm Preston Gates & Ellis, LLP. From there, Boggs moved to Starbucks, where she would work and rise up high in the company for the next 10 years. During her time there, Boggs became the Executive Vice President, General Counsel and Secretary, Law and Corporate Affairs.

Though happy with her work at Starbucks, it was only like Boggs to take another leap of faith and change direction once more. During her time at Starbucks, she made room in her busy schedule to take a songwriting class. Since, she has started The Paula Boggs Band. Together the “grassroots” soul, jazz, and blues group has released 2 albums.

“I don’t think I ever would have returned to music if I hadn’t worked at Starbucks or a company like it,” said Boggs, in an interview with the Seattle Medium in 2013. “Coffee is an emotional product. Starbucks attracts hugely creative people. Music is central to the Starbucks story.”

Nowadays, Boggs utilizes her creativity in business. She started Boggs Media, LLC, “a business that manages her music, speaking, and other creative business activities,” according to her website. Boggs focuses her time on assisting nonprofit organizations and presidential campaigns, and of course, telling her story through public speaking to inspire others.