Ryan Pitts Continuing his Service off the Battlefield 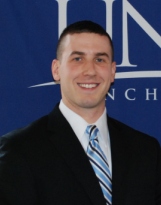 Aside from the NFL career, Staff Sergeant Ryan Pitts seems to have his life plan still on track.

This plan, as told by a kindergarten assignment, was to graduate high school, become a professional  football player, enlist in the military, get married, start a family, then retire at a ripe old age.

Though his service ended sooner than the younger Pitts had  anticipated, he still is regarded as a military hero for his bravery during what was later named the Battle of Wanat.

On the morning of July 13th, 2008, he was positioned at an observation post at the Wanat Vehicle Patrol Base in Afghanistan, when a wave of gunfire and grenades shattered the morning quiet. Pitts was blown backwards by an explosion. His legs and left arm were pierced with grenade shrapnel. He was bleeding heavily. He couldn’t stand, but he dragged himself into line with his comrades and returned fire.

The odds were stacked against his team—200 enemy forces to their 48. The overwhelming attacks left Pitts as the last man alive on that post. He prepared to make his final stand.

Somehow, a team of four soldiers managed to reach his station. Pitts was rescued, but another man died in his place. 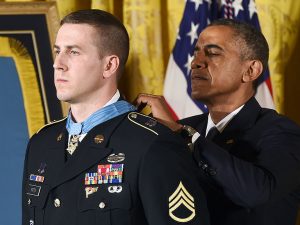 In 2014, Pitts received the Medal of Honor from President Obama for his bravery. In his speech, Pitts honors the sacrifice of his fallen comrades. Since then, he has traveled the country as a speaker, sharing his story with veterans and students alike. In May 2015, he gave the commencement address to the graduating class of his alma mater, the University of New Hampshire.

“Treasure the fact that you have just exceeded your first horizon,” he says, “search for the next one, and never back down.”

As a speaker, Pitts focuses on applying the lessons he learned from his experience on the battlefield to motivate others in their everyday life. He talks about courage as having the ability to move forward in the face of fear, and how courage can be found in everyday circumstances. He also stresses the importance of “shared purpose,” how your fellow teammates can push you to accomplish more than you thought possible.

Pitts continues to serve his fellow veterans by visiting hospitalized soldiers and raising money for veterans’ care and family support. Lately, he has been working to spread awareness for efforts to build a memorial in Boscawen, New Hampshire, to honor the soldiers died in Iraq and Afghanistan.
For more information on all of our speakers, please visit us at AEISpeakers.com and follow us on Facebook and Twitter!