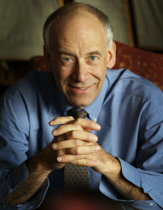 Alan November is an international leader in education technology. He began his career as an oceanography teacher and dorm counselor at an island reform school for boys in Boston Harbor. While Alan was a computer science teacher in Lexington, MA, he was probably the first teacher in the world to have a student project on line in 1984, a database for the handicapped. He has been director of an alternative high school, computer coordinator, technology consultant and university lecturer. He has helped schools, governments and industry leaders improve the quality of education through technology.

Audiences enjoy Alan’s humor and wit as he pushes the boundaries of how to improve teaching and learning. His areas of expertise include planning across curriculum, staff development, new school design, community building and leadership development. He has delivered keynotes and workshops in all fifty states, across Canada and throughout the UK, Europe, Asia, Australia, and Central America.

Alan was named one of the nation’s fifteen most influential thinkers of the decade by Technology and Learning Magazine. He was listed as one of eight educators to provide leadership into the future by the Eisenhower National Clearinghouse. He was selected to speak at the Cisco Public Services Summit during the Nobel Prize Festivities in Stockholm, Sweden. His writing includes numerous articles and two best-selling books, Empowering Students with Technology and Web Literacy for Educators. Alan was co-founder of the Stanford Institute for Educational Leadership Through Technology and is most proud of being selected as one of the original five national Christa McAuliffe Educators.

The author offers exercises, examples, handouts, and basic tips to help both learners and educators find and evaluate information on the Web for quality and validity. "Internet technology expert Alan November addresses everything an educator needs to know in this modern era to make use of the Internet for a better curriculum and how to address the problems it brings, such as plagiarism." (Wisconsin Bookwatch, June 2008 )

From an international leader in facilitating the integration of technology into learning and critical thinking, Empowering Students With Technology will energize the classroom with exciting ideas that will spark students' interest and rekindle the thrill of teaching. This book helps students and teachers connect content to real life through new resources and learning relationships that are available through technology. E-VENTURES, learning adventures powered by technology, will provide practical lesson ideas. Featured real-life stories demonstrate not only what is possible but also what technology is already accomplishing in classrooms. Fifty Web sites to support great teaching and learning are also included.

Who Owns the Learning?

In Who Owns the Learning?, Alan November uses his Digital Learning Farm model to show teachers how technology allows students to take ownership of their learning, create their own learning tools, and participate in work that has meaning to them and others. In his model, every student is a teacher and a global publisher.