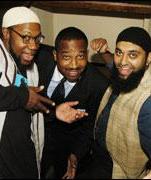 The question has always been: Where can Muslims and non-Muslims go for social growth and entertainment by us, for us, and about us? The answer: “Allah Made Me Funny: The Official Muslim Comedy Tour.”

The concept of the tour is to provide effective, significant, and appropriate comedy with an Islamic perspective, which is both mainstream and cross-cultural. The tour provides a venue whereby Muslims and non-Muslims can feel safe, relevant, and inclusive of an experience where humor is used to bridge gaps of bias, intolerance, and other social ills.

Cofounders of the tour Preacher Moss and Azhar Usman have already made the international radar, debuting the tour in Toronto, Ontario during Ontario’s first ever Muslim Comedy Festival. Reflecting the diversity of the Islamic religion, as well as the diversity of the United States, Usman, Moss and Azeem Muhammad, a rising comedy star, have put down ego and pride to show the world a cooperation rarely seen in comedy. Through their commitment, they’ve brokered “a project built not on competition, but a coalition.”