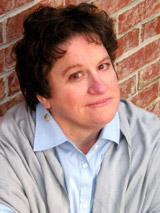 Amy Ellis Nutt is a former science writer on the national team of The Washington Post and the author of three books, including two New York Times’ bestsellers: “Becoming Nicole: The Transformation of an American Family,” and “The Teenage Brain,” with Frances Jensen. She was awarded the Pulitzer Prize in Feature Writing in 2011. She is now a full-time author and is currently working on her fourth book, for Random House, called “American Madness,” a narrative history of mental health treatment in America.

Nutt has taught at Columbia and Princeton Universities and was a Nieman Fellow in Journalism at Harvard in 2005-2006.

Becoming Nicole: The Transformation of an American Family

The inspiring true story of a transgender girl, her identical twin brother, and an ordinary American family's extraordinary journey to understand, nurture, and celebrate the uniqueness in us all, from the Pulitzer Prize-winning science reporter for The Washington Post When Wayne and Kelly Maines adopted identical twin boys, they thought their lives were complete. But it wasn't long before they noticed a marked difference between Jonas and his brother, Wyatt. Jonas preferred sports and trucks and many of the things little boys were "supposed" to like; but Wyatt liked princess dolls and dress-up and playing Little Mermaid. By the time the twins were toddlers, confusion over Wyatt's insistence that he was female began to tear the family apart. In the years that followed, the Maineses came to question their long-held views on gender and identity, to accept and embrace Wyatt's transition to Nicole, and to undergo an emotionally wrenching transformation of their own that would change all their lives forever.