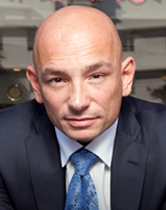 Anthony Melchiorri was born and raised in Brooklyn. After serving in the US Air Force, Anthony spent 25 years in the hotel business, developing his unique management style. He helped to turn around New York’s iconic Plaza Hotel, put the Lucerne on the New York Times list as one of the very best run hotels in the city, and recreated the magic of The Algonquin, the literary haunt of the famous “Round Table.” From there he went on to develop the Nickelodeon Hotel and Resort in Florida, became first vice president of Tishman Hotels and served as senior vice president of New York Hotel Management Company.

After 25 years in the hotel business, he took his no-nonsense approach to television. He is the creator and star of the wildly popular cable TV series, Hotel Impossible. Now in its fifth season, he works his magic each week to keep failing hotels with near-fatal problems, and especially the families who own these businesses, from going broke.

Now, on stage and in front of executives from all categories of businesses – not just the hotel and hospitality industries – nothing changes. With charm and humor, he explains his no nonsense approach to this theme: Every business needs to run like a first class hotel.

Among his many notable, highly motivational “take-aways” are:

* To win at business, your number one job is to suck less today than you did yesterday.