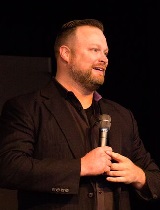 Ben struggled with Attention Deficit Disorder (ADD) throughout his formative years, ultimately finding it impossible to stay interested in school and leaving following his junior year in college. Although his ADD caused him to struggle academically, it proved to be a perfect companion in his career as a performer, creator, and educator. Rather than let it hold him back, he chose to be inspired by his condition. He uses it as a tool for writing, speaking, and making videos focused on ADHD and personal development.

Ben’s speaking engagements began spontaneously after his short-lived collegiate career when he was presented with the opportunity to tell his story at small church camps and conferences. He has since expanded his outreach by working with students, teachers, and speaking at corporate events. Ben is the published author of seven books and the founder of the Chalkguy LEGO drive.

When he is not working, Ben enjoys fishing, boxing, and spending time with his wife and two daughters. He credits his daughters for helping him overcome his fear of speaking to elementary age children.

In this fun, easy to read and informative book, Ben Glenn takes the reader on a rollercoaster ride that was and is his life as a person growing up and living with ADHD. Sometimes heartbreaking and sometimes hilarious, anyone with AD/HD will find it easy to relate to Ben's struggles to come to grips with what it means to be "special". Sharing personal stories of both failure and success in his down-to-earth, humorous style as well as his thoughts on what a person can do to turn their ADHD from a curse to a blessing, Ben's purpose for this book is to inspire and encourage anyone struggling with this fascinating and often misunderstood disorder. Read this book and discover a new way of looking at ADHD and its toughest challenges: impulsivity, distractibility and focus. Ben provides practical tips and suggestions on how to make the symptoms of ADHD manageable in your day-to-day life and aspires to help the reader begin a journey towards embracing their uniqueness and learning to love their ADHD.

Understanding the Peaks and Pitfalls of ADHD in the Classroom

Understanding the Peaks and Pitfalls of ADHD in the Classroom is the perfect resource for a busy teacher who is looking for a simple, how-to guide of working with students who have ADHD. It's short, it's fun and it's jam-packed with tips, stories and even a couple of cartoons! You will be inspired and encouraged.

The Building Success Brick By Brick series was created with Middle and High School students in mind. Ben Glenn might be a parent, but he still remembers vividly the challenges and adventures of his school days. Add to that his love of LEGOs and this series was born! Entertaining and thought-provoking, Glenn shares some of his favorite tips to help teens archive their goals, strengthen their self-esteem, improve their decision-making skills, get along with others, be better students and many others.

The Building Success Brick By Brick series was created withe Middle and High School students in mind. Ben Glenn might be a parent, but he still remembers vividly the challenges and adventures of his school days. Add to that his love of LEGOs and this series was born! Entertaining and thought-provoking, Glenn shares some of his favorite tips to help teens archive their goals, strengthen their self-esteem, improve their decision-making skills, get along with others, be better students and many others.

Story-telling has always been a powerful medium through which to pass on knowledge, culture and moral values. Stories entertain and sometimes even change lives. In Simply Sasquatch, Ben Glenn will convince you that you too have the opportunity to ignite a legend, by reviving the power of your life story, especially once you cross paths with Jesus Christ. Defining and telling your story has the power not only to strengthen you, but to change those around you, so that they too can be the authors of their story. The effects ripple for years, decades, even centuries. Part novel, part autobiography and part workbook, Simply Sasquatch will empower you with how and why to tell your story to the world. If you've struggled with sharing your faith or ever wondered whether you have a life story worth sharing, this book is for you. And of course, this would not be a true Ben Glenn book if it didn't have a fun twist. Cartoons, origami and an interview with Bigfoot splash throughout the pages, making it 'ADD friendly', hilarious at times, inspirational, and worth the journey.

Tools for Teaching Students with ADHD Without Losing Your Min