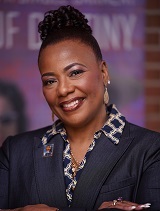 Dr. Bernice A. King is a global thought leader, strategist, orator, peace advocate, and CEO of the Martin Luther King, Jr. Center For Nonviolent Social Change (The King Center,) which was founded by her mother, Coretta Scott King. In this position, Dr. King continues to advance her parents’ legacy of Kingian Nonviolence, which she re-branded Nonviolence365™️.

Through her work at the King Center, she educates youth and adults around the world about the nonviolent principles and strategies modeled by her parents. Under her leadership, the Center has implemented numerous initiatives that have reached over five hundred thousand people, such as the annual Camp N.O.W. Leadership Academy, Students with King, Nonviolence365 Education & Trainings and The Beloved Community Talks, a courageous conversations platform about the difficult racial and social justice issues impacting our world. A nonviolence365 certification for trainers has also been developed under her leadership.

She graduated from Spelman College with a BA in Psychology with a concentration in Pre-Law and from Emory University with a Master of Divinity and Doctor of Law. She also received an honorary Doctor of Divinity from Wesley College. From 1990 -1992 she served as a law clerk for Judge Glenda Hatchett, who was the Chief Judge of The Fulton County Juvenile Detention Court. She also served for seven years as an Assistant Pastor of Greater Rising Star Baptist Church in Atlanta where she organized and developed over 3 new ministries. In 2007 she established the Be A King Scholarship in honor of her mother at Spelman College. Dr. King spearheaded the “Let Freedom Ring” event commemorating the 50th Anniversary of The March on Washington and her father’s “I Have a Dream speech.” The global event included then President Obama, former President Clinton and Carter, members of Congress, as well as many other international leaders, dignitaries and entertainers.

In March 2018, Dr. King was fortunate to have a private audience with his holiness Pope Francis. As an alumna of Leadership Atlanta (class of 2020,) she has utilized her influence to encourage Atlanta Business leaders to become more active in issues of racial equity and social justice. One outcome was the passage of Georgia’s Hate Crime legislation. In the fall of 2020, The Congressional Black Caucus Foundation honored her with their highest award, The Phoenix Award, which recognizes individuals who have made significant contributions to society. A noted author, she has to her credit, “Hard Questions, Heart Answers,” a compelling and inspiring book.

Dr. King is an innovative and transformational leader dedicated to taking her parents’ legacy and teachings, The King Center, and the work of creating a more just, humane, equitable and peaceful world with Nonviolence365 into a new era.

Bernice King, the youngest daughter of Martin Luther King, Jr., and Coretta Scott King, is an ordained minister, an attorney, and one of this country's most admired speakers. As this remarkable collection of her sermons and speeches makes clear, she shares with her father a rare gift for oratory and the wisdom and compassion to inspire others.