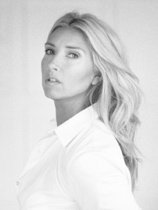 Bianca de la Garza is an Emmy® Award-nominated television host, journalist and media entrepreneur. She created and hosted her own late-night lifestyle and entertainment show BIANCA airing on 20 million US homes on ABC and CBS stations. It went up against Saturday Night Live and beat the long standing show on several occasions.

Bianca’s extensive entertainment and news background spans two decades from coast to coast in the US and international reporting. She is a skilled on camera performer who has acting credits in the NBC series Odyssey and regional theater productions like The Mom-o-logs.

Starting her own company Lucky Gal Productions Bianca has the knowledge of running a production from the ground up and the experience of taking a regional talk show to a national rollout in under 6 months. She has successfully secured millions in capital, developed advertising integration and created branded content campaigns.

Bianca has a keen ability to connect with her audience and multiple demographics — as a Latina, mom and business woman.

Her show BIANCA demonstrated immense success in markets who were looking for a new face in late night. Her advertisers and sponsors included Neiman Marcus, Dunkin’ Donuts and the MA State Treasury Department.

In addition to media, Bianca is involved in the beauty industry. Creating and developing an organic, GMO free skin care product set to be released in 2018 globally. As a host / anchor who spent years in front of high definition cameras, she believes this product is the ultimate solution for women of all races and ages seeking to keep their skin youthful and glowing.

Bianca is of Mexican descent and graduated from Emerson College. She earned multiple EMMY nominations anchoring WCVB—TV’s NewsCenter 5 EyeOpener. She received another Emmy® nomination for her coverage of the Royal Wedding of William and Kate in London, where she scored a world exclusive interview with Mohammed Al—Fayed.

Before Boston, her news reporting gained recognition across the nation, including investigative reports in San Diego, California. There, her award winning series led to the closing of an illegal sweatshop, and uncovered human trafficking abuses along the US/Mexico Border.

Bianca created and hosted a “Do It yourself” segment with Home Depot while working at the Fox affiliate in Boston. She appeared with Red Sox player David Ortiz in TV spots, promoting “Good Morning America.”

In her spare time, de la Garza dedicates her time to supporting charities that better the lives of children and fight cancer. Some of the organizations she has been involved with include Boys & Girls Club, The Breast Cancer Research Foundation, Action for Boston Community Development (ABCD), Home for Little Wanderers, and American Red Cross.

Bianca is currently in production for Us & the U.S. A show she created that will air in Europe on OWNZONES Passport and features millennials living their American dreams. It’s produced by her company Garza Digital.