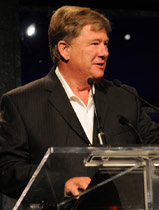 Former CNN Anchor Bob Losure has reached a milestone of 200 keynote speaking and emcee appearances in 2016 and unveiled two new keynote speech presentations focusing on “Overcoming Fear, Risk, Adversity and Change” and “Conquering Cancer Is Just The Beginning.” Bob overcame huge obstacles, enduring three operations and three rounds of chemotherapy, to fly to Atlanta to audition for the news anchor slot and get the job he coveted during the early days of CNN.

In one keynote, Bob focuses on how we can change our lives be overcoming fear and adversity to lead to what we truly want both in our home life and in our careers. His keynote on “Conquering Cancer Is Just The Beginning” tells his testicular cancer survival story and how it actually led him to leave Tulsa, Oklahoma and rise to the level of network anchor in Atlanta.

As a testicular cancer survivor, Bob has keynoted at numerous prestigious medical centers including M.D. Anderson in Houston, Cancer Treatment Centers of America, Duke University Medical Center, Provena St. Joseph’s Hospital in suburban Chicago, and Memorial Hermann Medical Center in Houston. The native Oklahoman recently keynoted on “CNN…Then and Now,” in Cincinnati before the CPCU Society chapter, sharing stories of his anchoring and reporting career from the time of the Space Shuttle Challenger disaster through the first Persian Gulf War, the O.J. Simpson trial, and beyond. During his years anchoring at CNN in the eighties and nineties, Bob went on-location for CNN Newsource, anchoring coverage of Nelson Mandela’s historic visit to Atlanta, Hurricane Hugo’s devastation, and the Loma Prieta earthquake in San Francisco.

Bob attended the University of Oklahoma and the Gaylord School of Journalism and Mass Communication, and has been inducted into the Communications Hall of Fame at his alma mater, The University of Tulsa. He’s been awarded his fraternity’s highest national alumni honor, The Order of West Range-given to only one other national journalist-former ABC broadcaster Ted Koppel.

Five Seconds to Air: Broadcast Journalism Behind the Scenes

In Five Seconds to Air, Losure shares his life story with great fun and panache as he chronicles his roots in Tulsa, Oklahoma, and his journey to Atlanta to anchor at CNN Headline News, a position he held for eleven years. He brings us face-to-face with some of the stories and events that have shaped our lives, including the Persian Gulf War and the 1989 San Francisco earthquake, as he recounts these events from the inside perspective of the CNN anchor who kept Americans informed while the news broke and unfolded. On a more serious note, Losure shares a very personal battle with cancer and his subsequent chemotherapy.