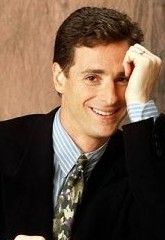 Bob Saget is a stand-up comedian whose unique comic riffs reflect his unbridled energy, which in turn has fueled his career as it expanded into acting, writing and directing. Bob makes his feature film directorial debut with Dirty Work.

Saget began his career writing and performing stand-up comedy more than two decades ago. He has toured with many top musical acts, opening for them in such venues as Carnegie Hall and the main showrooms in Las Vegas, Lake Tahoe and Atlantic City.

Moving to New York in 1987, Saget began a six-month stint as co-host of CBS’s The Morning Program with Mariette Hartley and Rolland Smith, where he produced and directed his own videos daily. That same year, he appeared in his first feature film, Michael Apted’s Critical Condition, which starred Richard Pryor. Numerous television appearances followed, on such shows as The Tonight Show, The Late Show With David Letterman, The Larry Sanders Show and as host of Saturday Night Live.

In 1989, Saget set a precedent as the first person to simultaneously star in two prime-time series: as the widowed father of three daughters in the eight-season run of the sitcom Full House and as the host and co-writer of America’s Funniest Home Videos. Both shows often concurrently place in the top ten rated series, and are now popular in daily syndication worldwide.

Despite his extraordinary success as a performer, Saget had always wanted to be a director. While a student at Temple University’s film school in 1978, he won a Student Academy Award for writing, directing and editing a documentary short, Through Adam’s Eyes, a true story based on the life of a young boy who underwent facial surgery. Later that year, the short was exhibited at FILMEX, the Los Angeles Film Festival.

In 1990, Bob Saget returned to directing with a one-hour HBO special In The Dream State, which he also wrote and starred in. He received an ACE Award nomination for his direction of that project. In 1995, during the hiatus from his television series, Saget executive produced and starred in the made-for-TV movie Father and Scout. He then returned his attentions to directing, helming a Lifetime telefilm Jitters, which starred Joely Fisher.

Prior to beginning production on Dirty Work, Saget directed and executive produced an intensely personal made-for-television movie For Hope, which was loosely based on the life and painful struggle of his sister, who died in 1994 from the autoimmune disease scleroderma. For Hope, which starred Dana Delany, Polly Bergen, Harold Gould and Tracy Nelson, aired in November of 1997, receiving high ratings and critical acclaim.