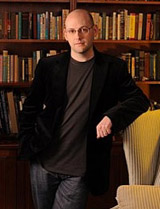 Brad Meltzer is the No. 1 New York Times best-selling author of The Inner Circle, The Book of Fate, and 10 other best-selling thrillers including The Tenth Justice, The First Counsel, The Millionaires, The President’s Shadow, and The Escape Artist. His most recent book and first work of nonfiction, The First Conspiracy, is about a secret plot to kill George Washington. Meltzer has books on bestseller lists for nonfiction, advice, children’s books, and even comic books, for which he won the prestigious Eisner Award. He is the host of Brad Meltzer’s Lost History on H2 and Brad Meltzer’s Decoded on the History Channel. (Based on Meltzer’s book, Decoded.) The Hollywood Reporter recently put him on its list of Hollywood’s 25 Most Powerful Authors. He lives in Florida with his wife.

Landing a prestigious position as a Supreme Court clerk fresh out of Yale Law, Ben Addison is on the ultra-fast track to success-until he inadvertently shares a classified secret with the wrong listener. And now the anonymous blackmailer who made a killing with Ben's information is demanding more. Guilty of a criminal act, his golden future suddenly in jeopardy, Ben turns for help to his roommates-three close friends from childhood, each strategically placed near the seats of Washington power-and to his beautiful, whip-smart fellow clerk, Lisa Schulman. But trust is a dangerous commodity in the nation's capital. And when lives, careers, and power are at stake, loyalties can shatter like glass...and betrayals can be lethal.

Two brothers. Three secret service agents. And millions for the taking. Charlie and Oliver Caruso are brothers who work at Greene and Greene, a private bank so exclusive there's a $2 million minimum to be a client. But when the door of success slams in their faces, the brothers are presented with an offer they can't refuse: $3 million in an abandoned account that can't be traced. It's the perfect victimless crime. Charlie and Oliver opt to take the money, but get much more than they bargained for. Now, with a lot of extra zeroes in their pockets and a friend found dead, the Secret Service and a female private investigator are closing in. Whose money did they take? How will they stay alive? And why is the Secret Service trying to kill them? Both Charlie and Oliver quickly realize it's not easy being The Millionaires.

The Book of Lies

Brad Meltzer--author of the #1 New York Times bestseller The Book of Fate--returns with his most thrilling and emotionally powerful novel to date. In Chapter Four of the Bible, Cain kills Abel. It is the world's most famous murder. But the Bible is silent about one key detail: the weapon Cain used to kill his brother. That weapon is still lost to history. In 1932, Mitchell Siegel was killed by three gunshots to his chest. While mourning, his son dreamed of a bulletproof man and created the world's greatest hero: Superman. And like Cain's murder weapon, the gun used in this unsolved murder has never been found. Until now. Today in Fort Lauderdale, Florida, Cal Harper comes face-to-face with his family's greatest secret: his long-lost father, who's been shot with a gun that traces back to Mitchell Siegel's 1932 murder. But before Cal can ask a single question, he and his father are attacked by a ruthless killer tattooed with the ancient markings of Cain. And so begins the chase for the world's first murder weapon. What does Cain, history's greatest villain, have to do with Superman, the world's greatest hero? And what do two murders, committed thousands of years apart, have in common? This is the mystery at the heart of Brad Meltzer's riveting and utterly intriguing new thriller

The Book of Fate

Brad Meltzer's #1 New York Times bestseller featuring a two-hundred-year-old code devised by Thomas Jefferson and a present-day conspiracy at the highest level of power . "Six minutes from now, one of us would be dead. None of us knew it was coming." So says Wes Holloway, a young presidential aide, about the day he put Ron Boyle, the chief executive's oldest friend, into the president's limousine. By the trip's end, a crazed assassin would permanently disfigure Wes and kill Boyle. Now, eight years later, Boyle has been spotted alive. Trying to figure out what really happened takes Wes back into disturbing secrets buried in Freemason history, a decade-old presidential crossword puzzle, and a two-hundred-year-old code invented by Thomas Jefferson that conceals secrets worth dying for.

From John Wilkes Booth to Lee Harvey Oswald, there have been fourteen assassination attempts on the President of the United States. Four have been successful. But now, Beecher White -- the hero of the #1 bestseller The Inner Circle -- discovers a killer in Washington, DC who's meticulously recreating the crimes of the world's most famous assassins: John Wilkes Booth. Charles Guiteau. Leon Czolgosz. Lee Harvey Oswald. But what's scariest of all is what all four assassins have in common. Historians have branded them as four lone wolves. But what if they were wrong? Beecher is about to find out the truth: that over the course of a hundred years, all four assassins were secretly working together. What was their purpose? Who do they really work for? And why are they planning to killing the President today? Beecher's about to find out. And most terrifying, he's about to come face-to-face with the fifth assassin.