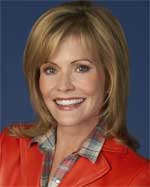 An Emmy and duPont-Columbia Award-winning journalist, and the youngest state judge to ever be elected in Texas, Catherine Crier is now a managing partner in Cajole Entertainment developing television, film and documentary projects.

Crier, a native of Dallas, earned her Bachelor of Arts degree in political science and international affairs from the University of Texas and received a Juris Doctor in two and a half years from Southern Methodist University School of Law. She began her career in law in 1978 as an Assistant District Attorney then Felony Chief Prosecutor for the Dallas County District Attorney’s office. From 1982 to 1984, Crier was a civil litigation attorney with Riddle & Brown, handling complex business and corporate matters. In 1984, she was elected to the 162nd District Court in Dallas County, Texas as a State District Judge. During her tenure on the bench, Crier also served as Administrative Judge for the Civil District Courts and worked extensively with the ABA, National Judicial College, and Texas Legislature on legal issues. Shortly after her reelection (unopposed) to a second term on the bench, a chance meeting with a television news executive led to a dramatic career change.

In September, 1989, Crier was hired to co-anchor the premiere evening newscast on CNN. Additionally, she co-anchored Inside Politics, all election coverage, and hosted Crier & Company, a talk show covering news, politics and international issues.

Crier joined ABC News in 1993, where she served as a correspondent and as a regular substitute anchor for Peter Jennings on ABC’s World News Tonight, as well as a substitute host for Ted Koppel’s Nightline. She also worked as a correspondent on 20/20, the network’s primetime news magazine program. Crier was awarded a 1996 Emmy for Outstanding Investigative Journalism for her work on the segment “The Predators” which examined nursing home abuses throughout the United States.

In October of ’96, Catherine Crier became one of the founding television anchors for the Fox News Channel, with her prime time program, The Crier Report, a live, hour-long nightly show, during which she interviewed the leading newsmakers of the day. Additionally, she co-anchored the evening news, election coverage and Fox Files, a magazine news show aired on the parent network.

Crier released her first book, the NYTimes bestseller, The Case Against Lawyers in October, 2002. Her second book, A Deadly Game: The Untold Story of the Scott Peterson Investigation became a #1 NYTimes bestseller and was followed by Contempt-How the Right is Wronging American Justice, and Final Analysis: The Untold Story of the Susan Polk Murder Case. Her fifth book, Patriot Acts-What Americans Must Do to Save the Republic, was published on November 1, 2011.

The Case Against Lawyers: How the Lawyers, Politicians, and Bureaucrats Have Turned the Law into an Instrument of Tyranny--and What We as Citizens Have to Do About It

The Case Against Lawyers is both an angry indictment and an eloquent plea for a return to common sense. It decries a system of laws so complex that even their enforcers - such as the IRS - cannot understand them. It unmasks a litigation-crazed society where billion-dollar judgments serve mostly to line the pockets of personal injury lawyers. And it excoriates the sheer corruption of the iron triangle of lawyers, bureaucrats, and politicians who profit mightily from all this inefficiency, injustice, and abuse.

An engrossing examination of one of America's most notorious and bewildering crimes-the gruesome murder of Felix Polk by his wife, Susan, in October 2002. With the same exclusive access and penetrating investigation that made A Deadly Game a #1 bestseller, Catherine Crier arrives at the scene of another stunning American crime. For decades, Susan Polk, mother of three, played devoted wife to Felix, her former therapist and a man 25 years her senior. The torment and alleged abuse that happened behind closed doors made headlines in October 2002 when Susan was arrested for fatally stabbing Felix in their Oakland, CA, compound.

A Deadly Game: The Untold Story of the Scott Peterson Investigation

In this #1 New York Times bestseller, Catherine Crier, a former judge and one of television's most popular legal analysts, offers a riveting and authoritative account of one of the most memorable crime dramas of our time: the murder of Laci Peterson at the hands of her husband, Scott, on Christmas Eve 2002. Drawing on extensive interviews with key witnesses and lead investigators, as well as secret evidence files that never made it to trial, Crier traces Scott's bizarre behavior; shares dozens of transcripts of Scott's chilling and incriminating phone conversations; offers accounts of Scott's womanizing from two former mistresses before Amber Frey; and includes scores of never-before-seen police photos, documents, and other evidence.

Patriot Acts: What Americans Must Do to Save the Republic

WHY WE NEED THE TRUTH, THE WHOLE TRUTH, AND NOTHING BUT THE TRUTH

The noise from both Washington and the media is deafening, the deeds of our lawmakers alarming. America needs a break from the posturing and the politicking. We need information: how we got here and where we are headed. Catherine Crier, one of the most respected figures in television journalism, presents an incisive, unbiased analysis of America's political crisis-delivering a message we cannot afford to ignore.

Contempt: How the Right Is Wronging American Justice

America's federal courts have an enormous impact on the daily lives of Americans. They also make up the last relatively independent branch of government. But, there is a committed and well-organized confederation of ultra-conservative politicians, reactionary interest groups, and fundamentalist religious sects working to change that once and for all. And they are succeeding.