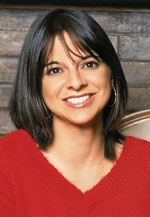 Cathy Areu named a magazine maven by NPR, and one of the “most influential women in New York City” by the Oxygen Network, is the owner and publisher of Catalina magazine, a multi-platform media company “for the mind, body, and soul of today’s Latina.”

Founded in 2001, Catalina was created to portray a positive image of U.S. Hispanic women in media and entertainment. By 2005, Catalina became the largest Hispanic magazine targeting US Latinas, with a circulation of over 500,000 and over 1.5 million readers.

In addition to Catalina, Cathy Areu has been a contributing editor for The Washington Post Magazine since 2000, profiling the most notable persons inside the Beltway, including First Lady Laura Bush, Former Secretary of State James Baker, and FBI Director Robert Mueller.

The national attention Cathy Areu and her magazine have garnered for Hispanic women has helped her rise quickly through the ranks to become one of the most recognizable Latina entrepreneurs in the country. Areu has appeared on CNBC’s Squawk Box, NBC’s Today Show, CNN’s Paula Zahn Show, Telemundo’s Hoy en el Mundo and countless other programs.

Cathy Areu has a Master’s degree in English education, and is a former journalism high school teacher and college professor, having taught for Palm Beach county schools and the University of Utrecht, Holland.

Latino Wisdom: Celebrity Stories of Hope, Inspiration, and Success to Recharge Your Mind, Body, and Soul

From the Author: "While researching for Latino Wisdom, my Latino interview subjects have taught me a thing or two about achieving success (as they see it). You have to ... 1. Know when to quit! When necessary, leave your comfort zone to move on to better things. 2. Wear blinders! Focus on YOUR future, and use your will and desire to stay motivated. 3. Be selfish! Be careful and protective of yourself when others may try to bring you down. 4. Be a little naive! Decide to "just do it," as the Nike ads say, and think about details later. 5. Be stubborn! Stay focused on the goal, while ignoring the nay-sayers."