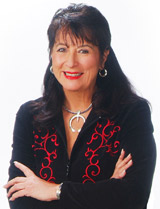 “If It Is To Be, It Begins With Me” is the powerful motivational motto Cheewa urges her audiences to use.

Cheewa James is a sought-after keynote speaker and corporate trainer, having worked with associations and corporations across the United States and Canada. She is especially known for her presentations on leadership, dealing with change and finding a balanced life style.

With a name like Cheewa, there has to be something different going on…and there is. She says it best herself: “My father is Modoc Indian and my mother is German.”

A former television anchorwoman and reporter, Cheewa is the recipient of seven UPI (United Press International) awards. She has been awarded the National Golden Mike Award for excellence in television production. She is currently a Sacramento PBS on-air talent.

An accomplished author with a large number of articles in print, Cheewa’s work has appeared in Smithsonian, National Wildlife, Chicago Tribune, Portland Oregonian and Kansas City Star. Her book, MODOC: The Tribe That Wouldn’t Die, is the phenomenal story of her own tribe, written over a 12- year period.

Cheewa James is degreed in the area of communication with graduate work in education and is a credentialed teacher.

MODOC: The Tribe That Wouldn't Die

Cheewa James, a direct Modoc descendant, offers in MODOC: The Tribe That Wouldn't Die an explosive and personal story of her ancestry. A decade of steady research and writing has produced a richly documented, deeply moving narrative. The book also contains 30 fictionalized vignettes. This book is the most comprehensive ever written about this remarkable tribe, covering Modoc ancestral times, the Modoc War, and the practically unknown story of what happened after the war. Its 350 pages contain over 150 blk/wh and color photographs, many rare and never before published. In a desperate, last-ditch effort in 1873 to cling to their ancestral lands, the Modoc Indians, numbering some 55 warriors, fought the U. S. Army's most expensive American Indian war. It cost $10,000 in 1873 currency to subdue each Modoc warrior. That is $282,220 in today s money. By the end of the six-month battle, over 1,000 soldiers were involved. James' book documents the massive attempt to rout out the Modocs and their families. The match for the Modoc Stronghold has not been built and never will be...It is the most impregnable fortress in the world, despaired Lt. Thomas Wright, who fought and eventually died in the war. The natural fortification still exists today in the jagged, desolate terrain known as the Lava Beds National Monument, California. Were it not for Custer's Little Bighorn Battle, the Modoc War would probably be remembered as America s most significant Indian confrontation. Lt. Col. Frank Wheaton, who commanded the military, said in an 1873 comment: I have never before encountered an enemy, civilized or savage, occupying a position of such great natural strength as the Modoc Stronghold. Nor have I ever seen a better armed or more skillful foe. This war dominated the front pages of newspapers all over America. A brigadier general was killed. Military men dropped like flies and most soldiers never even saw an Indian, as elusive Modocs slipped through the tortuous lava, in and out of the Stronghold. James' book is unique because it reveals for the first time the contents of two sets of letters written 135 years ago by military soldiers who fought in the war. The substance of these letters adds new pages to Modoc history. It is generally acknowledged that the Modoc culture, including the language, was lost as a result of the war. What is not realized is that the last chapter of that war is not yet written. One hundred and fifty Modoc men, women, and children were put in chains at the end of the war and sent by train as prisoners of war to Oklahoma Indian Territory. Approximately one hundred other Modocs, who did not participate in the war, remained on a reservation in Oregon. Families were split, separated by half a continent. Relatives were torn apart as their wails filled the air. Tribal culture and structure fell into decline. One hundred thirty-five years later, the descendants of these Modoc people, having the same bloodlines and ancestors, possessing the same family pictures tucked away in drawers and old photo albums, are strangers. They do not know each other. It is time to unify the Modocs in spirit erase the forced split resulting from those terrible days. What balm that would bring to the souls of those old Modocs. It is time for cousins to meet cousins and kin to know what happened over a century ago. Modocs need to know how they belong to each other even now. We need to build an understanding of other people and raise our children that way. Honor people as the human beings they are, regardless of race, gender, religion, and all the other walls and barriers to diversity that can be concocted.