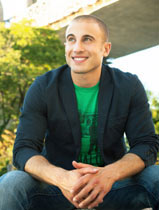 Chris Bashinelli was born and raised in Brooklyn, New York to Italian and Lebanese parents. His childhood friends shared a combined total of 13 nationalities – which significantly shaped his world-view. After a successful acting career, including an appearance on The Sopranos, Chris decided to follow his passion. At 20 years old, Chris moved to Tanzania to experience life in the developing world firsthand. Since then Chris Bashinelli has devoted his life to understanding the life and plight of others. He hasn’t looked back since.

As Host and Executive Producer of the internationally recognized series, Bridge the Gap, Chris traverses the globe, from Tanzania to Thailand, to experience life in someone else’s shoes. Bridge the Gap’s pilot episode premiered on National PBS Television. Chris has harvested Buffalo with Native Americans, walked miles for clean water in Haiti, run from venomous bees in Uganda, and worked side-by-side with individuals from many corners of the Earth.

As a Guest Author for award-winning publications, including the Huffington Post and Lonely Planet, Chris shares stories of social activists creating positive change in developing regions worldwide, personal stories of self-discovery and growth, and travel guides for the adventurer.

Chris is a sought after International Speaker who has appeared around the world at universities, conferences, corporate events, and frequently for the United Nations. In 2011 Chris became the youngest male to moderate the UN’s International Day of Peace, an event that included Stevie Wonder, Dr. Jane Goodall, and Academy Award-winning actor Michael Douglas. Whether he’s speaking at a community college in Appalachia or a UN Conference in Geneva, Chris Bashinelli shares his message of the “global stoop” we all live on.