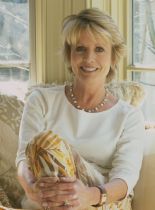 Celebrity designer Chris Madden is the force behind the multi-million dollar home furnishings empire that spans publishing, television, design and licensing and in 2007 celebrated the 30th year of the founding of her company. Her message of, “Turning Your Home Into a Haven” has been shared with millions of women throughout America. She was design correspondent for the Oprah Show, hosted her own television show on HGTV for eight seasons, and has published 16 books, including the bestselling A Room of Her Own, now in its eleventh printing. In May 2007 Chris Madden was honored by the Fashion Institute of Technology with an Honorary Doctorate in Fine Arts. In 2006 Hearst Publications announced a new magazine partnership with Chris Madden and most recently featured Chris on the September 2007 Your Good House cover with a feature on “Katrina Home Makeover with Designer Chris Madden.” In 2006 HFN named Chris Madden the 18th person on their annual list of the 50 most influential people in home furnishings style and design.

Introduced in JCPenney stores, catalogs and internet in May 2004, the Chris Madden for JCPenney Home Collection is the company’s most successful home furnishings launch in its 102-year history. Based on her three decorating lifestyles, “Adventurous,” “Romantic” and “Serene,” which Madden developed over three decades, the collection features a complete line of home furnishings, including furniture, bedding, bath, window treatments, rugs, lamps, wall art and decorative accessories. The luxurious CM Hotel Collection was launched in January 2006 and in August 2006 an extensive tabletop collection was introduced in JCPenney stores and internet.

Chris Madden‘s life-long passion for design began with a scholarship to The Fashion Institute of Technology in New York City. She then entered magazine publishing, where she learned the basics of journalistic photography. Positions at major book publishers followed, including Random House, G. P. Putnam & Sons, and Farrar, Straus & Giroux, where Madden was Director of Publicity. After a decade in publishing, Chris Madden returned to her roots — interior design. Her first book, Interior Visions, an insiders’ view of America’s top designer showcase houses, instantly became a bestseller. With the publication of A Room of Her Own: Women’s Personal Spaces (1997), Chris Madden‘s vision and message were fully realized, as this groundbreaking book continues to sell and is currently in its 11th printing.

Over the past 30 years Chris Madden has made her mantra of “giving back” and philanthropy an essential part of her corporate philosophy. To mark the 30th anniversary, Chris Madden and her team initiated “Project Katrina” in which they began the process of donating the contents of her Vermont warehouse filled with samples of her designs from the Chris Madden for JCPenney Home Collection to families in Southern Mississippi who lost their homes and all of their belongings in September 2005 to Hurricane Katrina.

Chris Madden‘s awards and recognition include The Partnership for the Homeless 2006 Commitment to Community Award, an honorary doctorate from the Academy of Art University in May 2005, the Fashion Institute of Technology’s 2005 Star Salute, the International Furnishings and Design Association’s 2004 Circle of Excellence Award, and the Long Island Junior League’s 2001 Woman of Achievement Award. In May 2007, Chris Madden received her second honorary doctorate from the Fashion Institute of Technology in New York.

A Room of Her Own: Women's Personal Spaces

Throughout America Chris has found women from all walks of life who have created for themselves a diversity of personal spaces that provide them the quiet and solitude needed to restore their souls each day. These range from Ali MacGraw's studio in northern New Mexico, its incredible mountain views provide the silence and tranquility she needs, to designer Sherri Donghia's fabric-filled loft in her Long Island country home, where she can stop, think, relax, and be really honest and creative, to television commentator Chantal Watermen’s home, where, amid a collection of altars, crosses, and other religious icons, she has created a peaceful and serene sanctuary. With over 200 beautiful, full-color photographs and an intimate, engaging text, A Room of Her Own: Women's Personal Spaces brings to life the special places that women have created as retreats from their busy everyday routines.

Usually the first room to greet guests, the living room is not only the most public area of any home, but also its most multifunctional. This essential room fills a variety of roles—from entertainment center to study area, children’s play zone to library, not to mention serving as the family’s gathering space, complete with couch and coffee table. Now Chris Casson Madden, nationally renowned design expert and author of Bedrooms, Getaways, and A Room of Her Own, imparts a wealth of decorating expertise in her new book, Chris Casson Madden’s New American Living Rooms. Showcasing a dazzling array of some of the most beautiful rooms across the country, Madden proves that living rooms can be at once practical, inviting, and inspiring.

Bathrooms is a richly illustrated, full-color survey of 30 of the country's most stylish and inviting bathrooms, with extensive source reference and practical information on how to make a dream bathroom a reality. The Book includes a detailed listing of the latest fixtures and products available for baths, along with advice on hiring a contractor or architect.