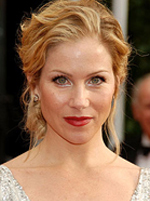 Making her acting debut as an infant with her mother on TV’s Days of Our Lives, Christina Applegate subsequently landed her first movie role at age ten when she appeared with Priddy in the low-grade horror flick Jaws of Satan. After playing Grace as a child in the TV biopic Grace Kelly, Christina Applegate guest starred on several TV shows before landing her own permanent series role in the short-lived Heart of the City.

Her next series, however, proved the charm. Debuting in 1987 on the fledgling Fox TV network, Married…With Children withstood criticisms about its all-around vulgarity to become one of Fox’s first signature hits. During its ten-year run, Married…With Children also spawned the TV movie It’s a Bundyful Life, featuring Christina Applegate and the rest of the Bundy clan in a spoof of holiday chestnut It’s a Wonderful Life. A bona fide teen heartthrob and star, Applegate attempted to show her serious side as a prostitute and drug addict in the gritty drama Streets. Teen comedy Don’t Tell Mom the Babysitter’s Dead tried to capitalize on Christina’s TV fame while showcasing her as a smart, resourceful, anti-Bundy character. Also during Married…With Children’s run, Christina Applegate appeared in the female road movie Across the Moon and mutilated rock musician-drama Vibrations.

Inspired by her experience with her mother growing up, Christina Applegate agreed to return to TV to star as a single mom balancing work and family in the sitcom Jesse. Despite choice time slots, however, Jesse was canceled in 2000. Applegate returned to movie comedy co-starring with Jean Reno as a princess and modern gal in the ill-received remake of a French time-travel yarn Just Visiting. Subsequently holding her own opposite some of her more lustrous film peers, Christina Applegate earned far better reviews than the movie itself as Cameron Diaz’s levelheaded best friend in the raunchy female bonding romp The Sweetest Thing and flew the friendly skies with Gwyneth Paltrow in the flight attendant comedy A View from the Top.

In 2004, Christina Applegate landed herself leading-lady roles in two of the year’s most anticipated films. First, in July, she starred opposite Will Ferrell in the 70s-era comedy Anchorman: The Legend of Ron Burgundy. Then, the following November, she could be seen with Ben Affleck in the holiday film Surviving Christmas.