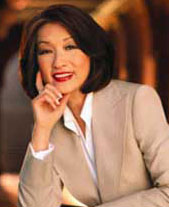 An award-winning investigative reporter and one of the most recognizable faces on American television, Connie Chung has been a powerful force in the news industry for more than 35 years.

The first Asian American and only the second woman to serve as nightly news anchor on a major TV network (The CBS Evening News), Connie Chung has received innumerable accolades for her work, including three national Emmy Awards, a Peabody Award, an Edward R. Murrow Award, and two commendations from American Women in Radio and Television.
On the stage Connie Chung tackles issues such as: diversity in the workplace, growing up Asian American, and challenges faced by women everywhere.