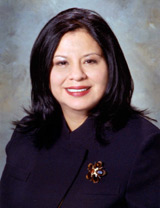 Born and raised along the border in a small barrio in Laredo, Texas, Consuelo Kickbusch overcame poverty, discrimination and illiteracy to become the successful community leader she is today. Although she grew up without material wealth, Consuelo was taught by her immigrant parents that she was rich in culture, tradition, values and faith.

The values Consuelo learned during childhood were reinforced throughout her career in the United States military. After graduating from Hardin Simmons University, she entered the U.S. Army as an officer and served for two decades. While in the military, she broke barriers and set records to become the highest-ranking Hispanic woman in the Combat Support Field of the U.S. Army. In 1996, she was selected out of 26,000 candidates to assume a command post, which would put her on track for the rank of general officer. She respectfully declined the honor and retired as a 22-year veteran of the U.S. Army to fulfill her mother’s dying wish – for her to return to her roots and become a community leader. In realizing her dream, she founded Educational Achievement Services, Inc. with a mission to prepare tomorrow’s leaders.

Consuelo currently shares her story with people of all ages and creeds. She is doing exactly what she preaches – living a legacy. She maintains a strong dedication to saving the youth of America by mentoring students and parents across the United States. In addition to her work with American youth, Consuelo reaches audiences in the corporate, professional, and non-profit, and multi-cultural markets.

Consuelo is the proud mother of five daughters and currently resides in Las Vegas, Nevada, with her husband, David.

Journey to the Future: A Roadmap for Success for Youth

Audiences have enjoyed Consuelo Kickbusch's spell-binding lectures in which she draws upon insights and "lessons learned" from her own personal experiences that are applicable to today's business world and the development of its future leaders.