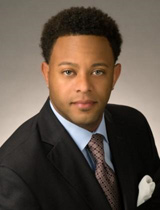 Corey Dade brings nearly 20 years’ experience as a media leader and strategic communicator through a wide range of appointments, from award-winning journalist to commentator to his current position at the global public relations firm Burson-Marsteller.

Corey is a Senior Director at Burson-Marsteller and a member of the leadership team in its Public Affairs and Crisis practice in Washington, D.C., where he counsels global corporations, nonprofit organizations and other clients. He specializes in leading issue campaigns, crisis communications, thought leadership, reputation management and media relations.

Previously, Corey was a commentator on MSBNC, CNN and other outlets and a journalist at some of America’s most influential news organizations, including as a national correspondent at NPR and a political reporter at The Wall Street Journal and The Boston Globe. He covered or managed the coverage of many major events, such as the Sept. 11 terror attacks, Hurricane Katrina and the BP oil spill, and covered Fortune 500 companies, economics and the global shipping industry.

As a political reporter, Corey covered Detroit mayors Dennis Archer and Kwame Kilpatrick, Boston Mayor Thomas Menino, Mitt Romney’s election as Massachusetts governor, Congress and the 2008 presidential election as a member of the press corps traveling with the Obama campaign. He also covered the 2010 and 2012 elections.

Corey has served on the executive board of the National Association of Black Journalists and the board of directors for the Atlanta Press Club. He also is a past president of the Atlanta and Detroit black journalists associations.