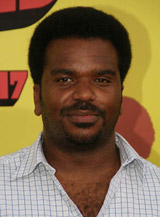 Prior to a career in show business, Craig Robinson was a K-8 teacher in the Chicago Public Schools. Craig Robinson got his undergraduate degree from Illinois State University and his masters of education from St. Xavier University. Craig Robinson began doing stand up and taking classes in improv and acting at the Second City in Chicago.