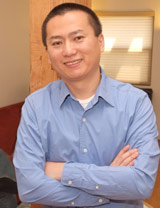 As a community activist, Curtis Chin co-founded the Asian American Writers Workshop and Asian Pacific Americans for Progress. In 2008, he served on Barack Obama’s Asian American Leadership Council where he participated in helping the campaign reach out to the AAPI community. Curtis has also been active in LGBT rights, serving as the chair of the Gay Asian Pacific Islander Men of New York and as a member of API Equality in Los Angeles. He and his partner are one of the 18,000 couples officially married in California before Prop 8. He has appeared on MSNBC, CNN, NPR, Newsweek and other leading media.

In October 2012, Curtis Chin will be receiving the Distinguished Service Award at the 16th annual American Courage Awards from The Asian American Justice Center (AAJC), a member of the Asian American Center for Advancing Justice, for his work in producing and promoting “Vincent Who?”, a film that has been integral to educating others about anti-Asian violence and the importance of pan-ethnic coalition building.

He has personally toured to over 200 colleges, libraries and corporations for the film “Vincent Who?”