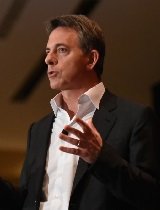 Dan has been committed to human transformation since he began studying it as a freshman at Harvard. “I think my classmates thought I had a screw loose,” he says. “There weren’t many popular frames of reference for human consciousness back in 1979. Words like ‘possibility’ and ‘transformation’ weren’t in vogue. But I knew from the moment I first encountered them that transformation technologies held the key to creating the kind of world we all want to live in.”

AIDSRIDES AND BREAST CANCER 3-DAYS
Dan invented the multi- day charitable event industry. He created the Breast Cancer 3-Day walks and the multi-day AIDS Rides, which raised in excess of half a billion dollars in nine years and were the subject of one of the first Harvard Business School case studies on social enterprise. The model and methods he created are now employed by dozens of charities and have raised in excess of $1.5 billion more for important causes from pediatric leukemia to AIDS to suicide prevention and many others.

SPEAKING
Dan has given well over 300 talks on philanthropy and innovation across the US and around the world. He is a William J. Clinton Distinguished Lecturer, and has spoken twice at TED, and at and for Google, E-Bay, KPMG, UBS, Stanford, Wharton, Brown, Harvard Business School, Harvard’s Hauser Center for Nonprofits, Harvard’s Kennedy School of Government, NASA’s Jet Propulsion Laboratory, the Council on Foundations, the Philanthropy Roundtable, the Gates Foundation, the Hewlett Foundation, national and global conferences for United Way, Boys & Girls Clubs, Big Brothers Big Sisters, Childrens Miracle Network, and many others.

WRITING
Dan is the author of “Uncharitable: How Restraints on Nonprofits Undermine Their Potential,” the best-selling title in the history of Tufts University Press. The Stanford Social Innovation Review said that the book, “deserves to become the nonprofit sector ’s new manifesto.” His newest book is, “Charity Case: How the Nonprofit Community Can Stand Up for Itself and Really Change the World.” Robert F. Kennedy, Jr. has described it as “An Apollo program for American philanthropy and the nonprofit sector”.

Dan is a featured regular contributor to the Harvard Business Review online.

CHARITY DEFENSE COUNCIL
He is the founder and President of the Charity Defense Council, a national leadership movement dedicated to transforming the way the donating public thinks about charity and change.

ADVERTISING FOR HUMANITY
Dan is the Chief Humanity officer for Advertising for Humanity, a bold agency of ideas committed to strengthening the fundraising power of some of America’s most innovative humanitarian organizations.

He has been written about in feature and cover stories in the New York Times, Wall Street Journal, Forbes, Los Angeles Times, Washington Post, Stanford Social Innovation Review, and has appeared on The Today Show, CNN, CNBC, American Public Media’s Marketplace, the TED Radio Hour, the BBC’s Business Matters, and on numerous NPR stations, among others.

PERSONAL
Dan lives in Massachusetts with his husband and their three children.

Charity Case: How the Nonprofit Community Can Stand Up For Itself and Really Change the World

A blueprint for a national leadership movement to transform the way the public thinks about giving.

Virtually everything our society has been taught about charity is backwards. We deny the social sector the ability to grow because of our short-sighted demand that it send every short-term dollar into direct services. Yet if the sector cannot grow, it can never match the scale of our great social problems. In the face of this dilemma, the sector has remained silent, defenseless, and disorganized. In Charity Case, Pallotta proposes a visionary solution: a Charity Defense Council to re-educate the public and give charities the freedom they need to solve our most pressing social issues.

Uncharitable goes where no other book on the nonprofit sector has dared to tread. Where other texts suggest ways to optimize performance inside the existing paradigm, Uncharitable suggests that the paradigm itself is the problem and calls into question our fundamental canons about charity. Author Dan Pallotta argues that society’s nonprofit ethic acts as a strict regulatory mechanism on the natural economic law. It creates an economic apartheid that denies the nonprofit sector critical tools and permissions that the for-profit sector is allowed to use without restraint (e.g., no risk-reward incentives, no profit, counterproductive limits on compensation, and moral objections to the use of donated dollars for anything other than program expenditures).

When Your Moment Comes

The four snakes in the Garden of Eden are cynicism, lack of commitment, major obstacles, and the desire to quit, according to motivational expert Dan Pallotta, a man who is living his dreams. He now shows readers how to receive their destiny and turn their hard work into smart work.