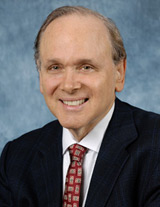 Daniel Yergin is a highly respected authority on energy, international politics, and economics. He is Vice Chairman of IHS Markit and chairman of CERAWeek, which CNBC has described as “the Super Bowl of world energy”.

Time Magazine said, “If there is one man whose opinion matters more than any other on global energy markets, it’s Daniel Yergin.” Fortune said that he is “one of the planet’s foremost thinkers about energy and its implications.” The New York Times described Daniel Yergin as “America’s most influential energy pundit”.

In 2014, the Prime Minister of India presented Dr. Yergin with “Lifetime Achievement Award” and the U.S. Department of Energy awarded him the first “James Schlesinger Medal for Energy Security.”

Dr. Yergin is a Pulitzer Prize winning author. His latest book, The New Map: Energy, Climate, and the Clash of Nations, was designated by Kirkus as “required reading. Another winner from a master.”

Dr. Yergin also authored the bestseller The Quest: Energy, Security, and the Remaking of the Modern World. The Economist described The Quest as “a masterly piece of work” by The Economist and The Financial Times called it “a triumph.” The New York Times said it is “necessary reading for C.E.O.’s, conservationists, lawmakers, generals, spies, tech geeks, thriller writers,” among many others.

Bill Gates summed up his review saying, “This is a fantastic book.”

Dr. Yergin is known around the world for his book The Prize: the Epic Quest for Oil Money and Power, which was awarded the Pulitzer Prize. It became a number one New York Times best seller and has been translated into 20 languages.

Dr. Yergin is also a business leader, as Vice Chairman of IHS Markit, one of the world’s largest research and information companies, with 16,000 employees, and founder of Cambridge Energy Research Associates, which became part of IHS in 2004.

Of Dr. Yergin’s book Commanding Heights: The Battle for the World Economy, which has been translated into 13 languages, The Wall Street Journal said, “No one could ask for a better account of the world’s political and economic destiny since World War II.” Both The Prize and Commanding Heights were made into award-winning television documentaries for PBS, BBC, and Japan’s NHK, which Dr. Yergin co-produced and co-wrote, and for which he was the leading narrator. The Commanding Heights received 3 Emmy nominations, CINE Golden Eagle Award, and the New York Festival’s Gold World Medal for Best Documentary.

Dr. Yergin was awarded the United States Energy Award for “lifelong achievements in energy and the promotion of international understanding.” He received the Charles Percy Award for Public Service from the Alliance to Save Energy. The International Association for Energy Economics gave Dr. Yergin its 2012 award for “outstanding contributions to the profession of energy economics and to its literature.” The University of Pennsylvania awarded him the first Carnot Prize for “distinguished contributions to energy policy.”

Dr. Yergin has served on the US Secretary of Energy Advisory Board under the last four presidents. He is a member of the Energy Policy Council of the Dallas Federal Reserve.

Dr. Yergin is a director of the Council on Foreign Relations and a senior trustee of the Brookings Institution. He is a member of the National Petroleum Council, a director of the United States Energy Association, and of the US-Russia Business Council. He is a member of the Advisory Boards of the Massachusetts Institute of Technology Energy Initiative and of the Columbia University Center on Global Energy Policy and of Singapore’s International Energy Advisory Board. He is a “Wise Man” of the International Gas Union and a member of India’s Ministry of Petroleum Think Tank.

The New Map: Energy, Climate, and the Clash of Nations

The Quest: Energy, Security, and the Remaking of the Modern World

Renowned energy authority Daniel Yergin continues the riveting story begun in his Pulitzer Prize winning book, The Prize, in this gripping account of the quest for the energy the world needs -- and the power and riches that come with it. A master story teller as well as one of the world's great experts, Yergin proves that energy is truly the engine of global political and economic change, as well as central to the battle over climate change. From the jammed streets of Beijing, the shores of the Caspian Sea, and the conflicts in the Mideast, to Capitol Hill and Silicon Valley, Yergin takes us inside the decisions and choices that are shaping our future. Without understanding the realities of energy examined in The Quest, we may surrender our place at the helm of history.

The Prize: The Epic Quest for Oil, Money & Power

Deemed "the best history of oil ever written" by Business Week and with more than 300,000 copies in print, Daniel Yergin's Pulitzer Prize-winning account of the global pursuit of oil, money, and power has been extensively updated to address the current energy crisis.

The Commanding Heights: The Battle for the World Economy

The Pulitzer Prize-winning author of The Prize joins a leading expert on the global economy to present an incisive narrative of the risks and opportunities that are emerging as the balance of power shifts around the world between governments and markets -- and the battle over globalization comes front and center. The Commanding Heights is essential for understanding the struggle over the "new rules of the game" for the twenty-first century.

Russia 2010: And What It Means for the World

2010: Russia disintegrates as its frontier regions rebel or drift into the orbit of neighboring countries. 2010: Russia is invigorated by an economic chudo -- "miracle" -- that turns it into a thriving exemplar of the free market. 2010: Russia becomes a grim military dictatorship, bent on expansion. This brilliant and visionary book, which is based on a confidential report by the international consulting firm CERA, offers several persuasively detailed scenarios of Russia's future. Using the management technique of "scenario planning" and drawing on an extensive knowledge of Russia's political and economic history, Daniel Yergin and Thane Gustafson have produced a study that is already shaping the investment strategies of major corporations and that will become an essential text in the policy debates about the next century. Russia 2010 captures in a timely way the changes shaking Russia and the former Soviet Union after Communism. The result is one of those rare books that not only predict the future but have the power to change it.

Shattered peace: The origins of the cold war and the national security state

Drawing on once-secret archives and private papers, Daniel Yergin documents this transformation of the American viewpoint and analyzes how the Cold War policy came about.