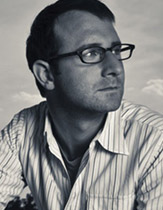 Danny Forster loves architecture, from the gorgeous curve of a building’s roofline to the mathematics at its foundation. But he’s passionate about buildings that do more than simply look amazing and stay upright. For Danny Forster, the moment when great architecture happens is when the shape, the structure, the material, the texture, the orientation, even the color of a building all collaborate to become a singular solution to a multitude of problems.

Danny Forster has built a career out of the ingenious solution: celebrating it as a television host, lecturing about it as a speaker and professor, and finding it himself as a practicing designer.

As the host of the Science Channel series Build It Bigger, Danny Forster travels the world with a camera crew in search of incredible feats of architecture and engineering-a record-setting skyscraper, a city-saving levee, a mammoth cruise ship, a state-of-the-art football stadium. Now one of the highest rated shows on the Science Channel, Build it Bigger captures viewers with Forster‘s daring, wit, and enthusiasm, and keeps them with his architectural expertise.

Danny Forster first studied architecture as an undergraduate at Wesleyan University, where he received a BA in Architectural History in 1999. After several years in New York City, as a real estate broker and founder of the Internet start-up UrbanFilter, he entered Harvard University’s Graduate School of Design. He received his Master’s degree in architecture in 2006, and went on to open his own design firm which specializes in inventive, affordable, sustainable design-the ingenious solution that works with the environment and within a budget.

Danny Forster‘s passion for great architecture and his exceptional ability to share that passion have made him a sought-after speaker and a popular teacher. He has delivered keynote addresses at engineering and architecture conferences all over the world. In 2008 he joined the faculty at Harvard’s Graduate School of Design, teaching an upper level graduate architecture studio on sustainable design. Syracuse University asked him to bring the course to its School of Architecture in 2010.

Designing pioneering projects for Danny Forster Design Studio, lecturing internationally, and filming for Build It Bigger, Forster is continually at work and on the move creating, explaining, and popularizing ingenious design solutions. He is also at work, closer to home, as creator and executive producer of a documentary series about the rebuilding of Ground Zero. Rebuilding Ground Zero explores the coming to life of a work of architecture that solves a host of problems – cultural, physical, historical, environmental – within one coherent project.