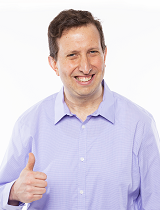 Following Kerpen’s sponsored wedding which raised over $100,000 including $20K for charity, he and his wife Carrie started and transformed theKBuzz (founded in 2007) into Likeable Media, the only 3-time WOMMY Award winner for excellence from the Word of Mouth Marketing Association (WOMMA) and one of the 500 fastest growing private companies in the US according to INC Magazine for consecutive years. Kerpen is among the most popular writers in LinkedIn’s Influencer program, one of the most-read contributors for Inc.com , and has been featured by CNBC, BBC, ABC World News Tonight, the CBS Early Show, the TODAY Show, the New York Times, and more.

He has also keynoted at dozens of conferences across the globe including Singapore, Athens, Dubai, San Francisco and Mexico City. Likeable Social Media: How to Delight Your Customers, Create an Irresistible Brand, and Be Generally Amazing on Facebook and Other Social Networks, was Kerpen’s first New York Times bestselling book. He followed Likeable Social Media with two more bestselling books, Likeable Business and Likeable Leadership. His fourth book, The Art of People, offers 53 bite-sized, easy-to-execute, and often counterintuitive tips, to learn and master the 11 People Skills that will get readers more of what they want at work, at home, and in life.

The Art of People: 11 Simple People Skills That Will Get You Everything You Want

What does it take to win success and influence?
Some people think that in today’s hyper-competitive world, it’s the tough, take-no-prisoners type who comes out on top. But in reality, argues New York Times bestselling author Dave Kerpen, it’s actually those with the best people skills who win the day. Those who build the right relationships. Those who truly understand and connect with their colleagues, their customers, their partners. Those who can teach, lead, and inspire.
In a world where we are constantly connected, and social media has become the primary way we communicate, the key to getting ahead is being the person others like, respect, and trust. Because no matter who you are or what profession you're in, success is contingent less on what you can do for yourself, but on what other people are willing to do for you. Here, through 53 bite-sized, easy-to-execute, and often counterintuitive tips, you’ll learn to master the 11 People Skills that will get you more of what you want at work, at home, and in life.

Praised by bestselling authors and industry CEOs such as Jeffrey Hayzlett, Chris McCann, Christian McMahan, Chris Stout, Chester Elton, Jim Tobin, and Adam Grant, Likeable Leadership explores the integral traits of what makes a leader likeable, leaving readers motivated to improve their careers and personal lives with Dave's action items.
Whether you're a CMO of a Fortune 500 company, an entrepreneur, a recent college grad, or anywhere in between, Dave's anecdotes will inspire you, help you evaluate yourself and help you to become a better leader inside and outside the office.

Likeable Social Media: How to Delight Your Customers, Create an Irresistible Brand, and Be Generally Amazing on Facebook (& Other Social Networks)

A friend’s recommendation is far more powerful than any advertisement today. It seems that everyone is connected 24 hours a day, seven days a week to Facebook, Twitter, Pinterest, and many other social sites. Each opinion, judgment, and idea is sent out to the world the moment it’s formed. Recommendations travel farther—and faster—than ever before.
There’s no doubt a marketing revolution is afoot. TV, radio, and print ads are out—and personal likeability is in. When it comes to your business, one Facebook “like,” one Twitter retweet, or one blog post share can translate into major sales. But how do you get people to click?
Written by Dave Kerpen—the expert on turning likeability into measurable profits—Likeable Social Media is about harnessing the power of the social web to build effective word-of-mouth marketing campaigns that will transform your business.
In this fun but highly substantive read, Kerpen gives you the information and tools you need to truly engage your customers and help them spread your message far and wide. He reveals all the secrets to popularizing a brand by being authentic, engaging, and transparent—and he teaches you the same methods he used to redefine brands such as 1-800-FLOWERS.com, Neutrogena, Verizon FiOS, and dozens more.

Likeable Business: Why Today's Consumers Demand More and How Leaders Can Deliver

You can have a rock-solid business strategy, unlimited resources, and the most talented people on staff. But only one thing is guaranteed in today’s hyperconnected society: if your business isn’t likeable, it will fail.