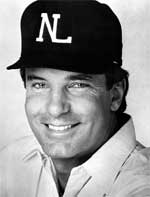 Dave Pallone worked 18 years as a professional umpire; 10 of those years with the National Baseball League. As the third youngest umpire in baseball history, Dave Pallone demonstrated courage, professionalism and the ability to withstand adversity through many of baseball’s high profile controversial events.

Dave Pallone is the author of the 1990 New York Times best-selling autobiography, Behind the Mask: My Double Life in Baseball, which offers a revealing look at baseball through the eyes of a gay man. Since the publication of his autobiography, Pallone has dedicated his life to educating and enlightening people about the reality of sexual orientation. His philosophy of respecting yourself and others, provides insight into the complex issues and challenges that come from understanding sexual orientation.

Pallone is a member of the Society for Human Resource Management, and has been a keynote speaker at conferences, diversity trainer on sexual orientation for corporations, and has brought his work on sexual orientation sensitivity to hundreds of higher education campuses. He is on the NCAA’s preferred speakers list for diversity, and has brought his presentation to athletic departments around the country. Making history on October 11, 1995, Dave Pallone and tennis great Martina Navratilova appeared on stage together for a candid conversation at the University of Massachusetts, Amherst. It was the first time that two prominent, openly gay people in professional sports appeared on stage.

Dave Pallone has given interviews for national publications such as the The Los Angeles Times, The Boston Globe and The New York Times and has written OP-Eds for USA Today and New York Newsday. He has been a frequent guest on “Larry King Live,” and has appeared on The Today Show, CBS Morning, BBC Radio, NPR, and several others.

Pallone owned and hosted his own sports radio show in Boston, Massachusetts and has been featured in ESPN’s documentary “Homophobia in Sports”, as well as appearing on ESPN’s Outside the Lines. Pallone was honored to be selected by GENRE Magazine as one of the 100 men of the 20th century.

Behind the Mask: My Double Life in Baseball

In his hotly-controversial New York Times bestselling autobiography (Viking 1990 & Signet paper 1991: No. 8 on NYT list for 10 weeks) former National League umpire Dave Pallone rips the homophobic mask off major league baseball with a brutal candor that bristles with drama and truth. But the real kicker here is Pallone's parallel -- and explicit -- account of his coming to grips with his sexuality in a culture that seems as confused about this as him. Through remarkably-detailed, funny, touching, outrageous, and sexy stories, he openly explores a complex life fraught with persecution, exhilaration, tragedy, and glamour (like brief affairs with a major "heartthrob" film star and a popular "macho" baseball player) without self-promotion or self-pity. In straight, frank talk, Pallone opens himself to more public scrutiny and critique than any other professional sportsperson in memory, while reminding us that our culture, even in its 21st century, still wrestles with how to accept all of its citizens equally.