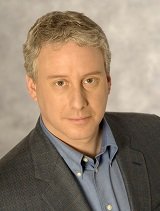 David Brancaccio is the host and senior editor of Marketplace Morning Report. Airing five times each morning, his reporting focuses on the future of the economy, financial and labor markets, technology, the environment and social enterprises.

In the early 1990s, David was Marketplace’s European correspondent based in London, and he hosted Marketplace’s evening program from 1993 to 2003. From 2003 to 2005, he co-anchored the PBS television news magazine “Now” with journalist Bill Moyers before taking over as the program’s solo anchor in 2005. His feature-length documentary film, “Fixing the Future,” appeared in theaters nationwide in 2012. Among his awards for broadcast journalism are the Peabody, the Alfred I. duPont-Columbia, the Cronkite and the Emmy.

He has appeared on CBS, CNBC, MSNBC and BBC World Service Television; his written work has appeared in The Wall Street Journal, The Baltimore Sun and Britain’s The Guardian. David is author of the book “Squandering Aimlessly,” an exploration of how Americans apply their personal values to their money. He also hosts the “Esquire Classic” podcast with Esquire Magazine.

David has a bachelor’s degree from Wesleyan University and a master’s degree in journalism from Stanford University.

David lives in New Jersey with his wife, Mary Brancaccio, a poet and educator. He grew up in Waterville, Maine, and also attended schools in Madagascar, Ghana and Italy. His enjoys public speaking, bicycling and photography.

Squandering Aimlessly : MY ADVENTURES in the AMERICAN MARKETPLACE

A record of a financial odyssey across contemporary America from the host of public radio's popular show "Marketplace" explores the issues that would arise it one were to suddenly become wealthy, including investment ideas, house buying, and more.