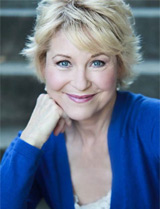 DEE WALLACE is an internationally known actress (130 films, 4 series, over 200 commercials) best known for her role as the mother in Steven Spielberg’s E.T.! She has appeared on every major network and talk show, including Oprah and The Today Show. Ms. Wallace earned her teaching credentials from The University of Kansas, and has worked as a teacher in the public school system, as well as her own dance and acting studios. Ms. Wallace expanded her love of teaching, and the principles she found empowering for children, into daily sessions, a radio show and five books. Her work is based on the principles of accepting responsibility, and loving ourselves early in life to create the life we desire.

Dee is a strong advocate for accepting (at an early age) our own magnificence and power in a positive, loving way. A child’s personality is set between 4-7 years of age which has a direct impact on the creation of their life. Dee’s important message to the world is: Love yourself beyond anyone or anything else. Love yourself so much that you can’t do anything that doesn’t make you love yourself more.

Dee has authored five books on the subject of self-creation: Conscious Creation, The Big E!, Bright Light, Getting Stuff and Wake Up Now! She conducts a live (call-in) internet radio show each Sunday morning at 9 AM Pacific, and offers monthly webinars on a variety of creation subjects. Dee conducts private sessions from her home in Woodland Hills, California via phone and in person.

As a much sought after speaker, Dee has spoken at numerous national and international venues including the Love and Harmony Forum in Japan, The Dillon Lecture Series, Unity Temple, The Kansas Film Commission, and asked to speak in China, New Zealand, Amsterdam, Australia, England and all across the United States and Canada. Dee has appeared on every major news and talk show and has been featured on E! True Hollywood Stories, and Oprah.

Born Giving Birth to a New You

﻿﻿BORN expands the concepts of Law of Attraction exponentially and awesomely simplifies everything you think you know about the power of Self-Creation. BORN is NOT a book about affirmations, visioning, Dark Energy, Self-Protection, or waiting for directions from God, the Guides or the Angels, Karma, or Struggle. It IS a book about Directing Energy, Knowing, Neutrality, Self-Actualization, Knowing You are the Power, Claiming Your Desires, and Easy Creation. Dee Wallace's BORN is a powerful book about how Spirituality, Brain Science, and Religion are all teaching the same principles, and how you can easily use them in creating your life.

Wake Up NOW! A Book of Universal Truths

Wake Up NOW! A Book of Universal Truths, is a book filled with a variety articles written by internationally know bestselling author, actress, healer and clairaudient Dee Wallace. All the material within is based on channeled information that Ms. Wallace has shared weekly with her group of international radio participants. Included is information about the secrets of creation, Universal Truths, relationship guidance, money empowerment, healing the body and more. Written with humor, directness, and from her very human perspective, Dee often shares these truths through intimate insights into her own life, which makes it more identifiable for the reader. Use this book as a weekly guide, an awareness tool, or a complete single read.

Bright Light: Spiritual Lessons from a Life in Acting

Like you, Dee Wallace came in as a bright shiny light, and she knew from the beginning that her soul quest was to keep that light shining and share it with others. This was a challenge growing up poor in Kansas amidst all the conflicting religious and social messages of her upbringing. But she stuck to this strong intent and followed her knowingness in a meteoric rise as an actress, becoming an acting icon after only five years with the success of E.T., and then faltering and losing her way only to reclaim the power of that knowingness later in life. Bright Light works as an autobiographical tale of an actor's life and craft, and how that journey applies to everyone's spiritual journey. It is the story of Everyman: the reclaiming of Self. Each chapter of Dee Wallace's story is characterized by a concept like intention, in which the narrative becomes an allegorical exploration of its qualities. Dee Wallace has rediscovered the wisdom that we all know but forget: that true success comes from following the heart's lead, and that the mind only creates form for spirit's creative manifestation. Our consciousness is our intelligence.

We are all creating every moment we are alive. Every thought, belief and action is a creation. But most of us are not choosing the majority of things that are actually creating our lives. From the commercials of disease that we watch to the conversations of lack and fear we have over coffee, most of us are unconsciously focusing our energy to create the very things we don't want. Most of us are not consciously aware that when we say, "I am _______________", is a direction to our subconscious to create that statement.If we do not consciously create, we become created upon. Conscious Creation is easy. But we must choose to love ourselves enough to live consciously in the magnificence of who we truly are. We are here to be happy.When we consciously choose to live in love, celebrate our power, demonstrate our abundance and contribute positively to the Creative Force, there is nothing we cannot experience as joy and success.We are created magnificent. Choose to know that. Choose to be conscious of creating your life. Choose. Love. Demonstrate. Celebrate. You are here to be happy.

The Big E: Everything is Energy

Shows you why things happen the way they do (and even better, how to change them). This title explores the nature of colloquialisms and show you how to create anything you want by unleashing the power of your own energy. It offers a look at the Universe and how our thoughts go from energy to action and bring about our daily lives.