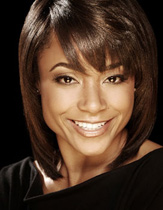 After years of dedication to gymnastics and a brief stint on Broadway, this University of Maryland graduate retired to focus on her passion to encourage, educate and motivate others on the topics of health, fitness and empowerment. Dominique has served as a co-host for Yahoo! News’ Weekend Edition and as an Olympic correspondent for FOX Sports. As part of FOX Sports’ analyst team during the 2012 London Olympic Games, Dominique recapped daily events and conducted a sit down interview with All-Around Gold Medalist Gabrielle Douglas. While in London, Dominique was also interviewed by top national media including USA Today, Piers Morgan and Good Morning America. She was also a part of the President and First Lady’s Olympic Delegation and had the privilege to conduct an interview with the First Lady.

Dominique, appointed by President Barack Obama, currently serves as the co-chair of the President’s Council on Fitness, Sports & Nutrition alongside NFL Quarterback Drew Brees. Through this program she works closely with the First Lady to help promote the Let’s Move! initiative, educating children on fitness and nutrition while motivating them to get moving.

Today, Dominique is a highly requested keynote speaker who delivers powerful and inspiring messages on leadership, personal drive, building your foundation for success and living a healthy lifestyle. She has the unique ability to empower audiences, from corporate executives and small business owners, to women’s groups and moms, universities and youth organizations.

Dominique resides in the Northern Virginia area with her husband Jeff Thompson and two beautiful daughters, Kateri and Quinn.