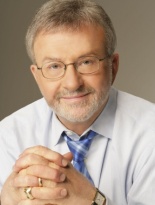 Don Hutson‘s careers in speaking, management and sales have brought him many honors. He successfully worked his way through the University of Memphis, graduating with a degree in Sales. After becoming the #1 salesperson in a national training organization, he established his own training firm and shortly thereafter was in demand as a professional speaker.

Since then Don Hutson has addressed over two-thirds of the Fortune 500 Companies and is featured in over 100 training films. He is Chairman & CEO of U.S. Learning and makes some 85 speaking appearances per year. Perhaps you have seen him on national television where he is regularly featured on both PBS and the TPN.

Don Hutson is the author of The Sale and The Contented Achiever, and is a member of the prestigious Speakers Roundtable.

Don Hutson was elected by his peers to the presidency of the National Speakers Association, and he has received its “Cavett Award,” as member of the year. He is also in NSA’s Speakers Hall of Fame.

THE SALE, with 25 critical success skills, was written to give everyone with communications and persuasive challenges new and strategic techniques that work in today’s intensely demanding marketplace. In this exciting new book, twenty-five year sales veteran sales trainer Don Hutson will give you new skills to... • Visualize, set and achieve goals with greater skill and determination than ever before. • Identify the needs and agenda of others with clarify and professionalism. • Gain a competitive advantage through presentations that overshadow your competitors. • Develop greater trust and better relationship skills with your customers than ever before. • Empower yourself to enjoy more income, personal satisfaction and career progress. • Utilize the "authorship principle" to get prompt, genuine commitments from others.

The Contented Achiever : How to Get What You Want and Love What You Get

This book will bring clarity, simplicity and a sense of purpose to high achievers. While many people are high achievers, and some people are quite contented, it is very rare indeed to find a person who is both at the same time. Full of fun-to-read and insightful stories, it helps answer questions plaguing many people today. How can I avoid having an abundance of work and a shortage of joy? How can I spend more time on activities that nurture my soul? How can I be a high achiever, make it to the top of my profession, and still be contented? It encourages you to design your own path in life, and in the process, realize that having it all is as much about a balanced life as it is about a balance sheet.

The One Minute Entrepreneur: The Secret to Creating and Sustaining a Successful Business

Mega-bestselling author Ken Blanchard and celebrated business leaders Don Hutson and Ethan Willis present an inspiring story that reveals the secrets to becoming a successful entrepreneur. In The One Minute Entrepreneur, Ken Blanchard (coauthor of the #1 bestselling business classic The One Minute Manager), Don Hutson, CEO of U.S. Learning, and Ethan Willis, CEO of Prosper Learning, tell the inspiring story of one man’s challenges in creating his own business. Through a powerful and engaging narrative, we confront many of the typical problems all entrepreneurs face in starting up their business, from finding new sources of revenue to securing the commitment of their people and the loyalty of their customers. More important, we learn the secrets to becoming a successful entrepreneur, including how to build a firm foundation, how to ensure a steady cash flow, and how to create legendary service. In addition, the book offers invaluable advice, delivered through One Minute Insights, from such entrepreneurs and thinkers as Sheldon Bowles, Peter Drucker, Michael Gerber, and Charlie “Tremendous” Jones. Today, in the midst of the largest entrepreneurial surge in U.S. history, four out of five small businesses continue to fail. The One Minute Entrepreneur offers businesspeople and would-be entrepreneurs a treasure trove of wisdom on how to think, act, and succeed in creating and sustaining a business, no matter what their industry.

The One Minute Negotiator: Simple Steps to Reach Better Agreements

The One Minute Negotiator uses an engaging business parable to tell the story of a high-level sales professional who learns the value of understanding and executing a simple yet profound approach to negotiations – an approach that can be applied to getting the best loaner car while your cars in the shop, seeking a fair solution after a hotel messes up your reservation, closing a deal to get your product in a big-box retail store, or settling on the price for your new home. There are two primary schools of thought when it comes to negotiation skills. One essentially comes from the Harvard Business School camp, and it's perhaps best described as "Thou Shalt Collaborate." This approach teaches that negotiating parties should always work together toward common interests. The other school of thought, mostly pushed by author/consultant Roger Dawson, takes an opposite approach. Call it "Thou Shalt Compete," this approach is always overtly or subtly adversarial. The One Minute Negotiator differs in that it doesn't single-mindedly push one strategy over the other—in the real world every negotiation differs depending on the participants and the circumstances. The authors provide an easy-to-use tool that allows you to understand your own negotiation strategy and quickly match it to the negotiation strategy used by the other side and to the situation. Too many people lose out in negotiations because of apprehension and misunderstanding about the process—what the authors call "negotiaphobia". By providing a simple, straightforward process anyone can use The One Minute Negotiator to help conquer their fears and achieve the most beneficial outcome in all their dealings.