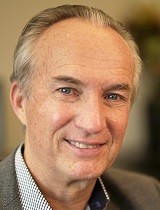 Don Peppers’ work routinely examines the business issues that today’s global enterprises are grappling with while trying to maintain a competitive edge in their marketplace. In 2016, he released his 11th book, Customer Experience: What, How and Why Now, a collection of bite-sized essays offering insights and “how to” recommendations on building and maintaining a customer-centric business. It uses real world examples to cover not just the central issue of customer experience, but also corporate culture, strategy, technology, and data analytics.

With business partner Dr. Martha Rogers, Peppers has produced a legacy of international best-sellers that collectively sold well over a million copies in 18 languages. Their first book, The One to One Future (Doubleday, 1993), was called by Inc. Magazine’s editor-in-chief “one of the two or three most important business books ever written,” while Business Week said it was the “bible of the customer strategy revolution.” As a testament to this, Don Peppers and Martha Rogers were inducted into the Direct Marketing Association Hall of Fame in 2013.

Peppers’ and Rogers’ ninth book together is Extreme Trust: Turning Proactive Honesty and Flawless Execution into Long-Term Profits (Penguin, 2016). And in 2017, Wiley Publishers released the third edition of their graduate school textbook, Managing Customer Experience and Relationships: A Strategic Perspective, originally published in 2003.

With over 300,000 followers for his regular postings of original content on LinkedIn, Don has been listed numerous times on LinkedIn as one of the Top 10 Marketing Influencers. In 2015, Satmetrix listed Don and Martha Rogers #1 on their list of the Top 25 most influential customer experience leaders. The Times of London included Don on its list of the “Top 50 Business Brains,” and Accenture’s Institute for Strategic Change listed Don as one of the 50 “most important living business thinkers” in the world.

Prior to founding CX Speakers and Peppers & Rogers Group, Don served as the CEO of a top-20 direct marketing agency (Perkins/Butler Direct Marketing, a division of Chiat/Day), and his 1995 book, Life’s a Pitch: Then You Buy (1995), chronicles his exploits as a celebrated business rainmaker in the advertising industry. Before his career on Madison Avenue he worked as an economist in the oil industry and as the director of accounting for a regional airline. He holds a B.S. in astronautical engineering from the U.S. Air Force Academy and a Master’s in Public Affairs from Princeton University’s Woodrow Wilson School. He is a competitive runner and happily married father of five.

Customer Experience: What, How and Why Now

When it comes to customer experience, Don Peppers is one of the world’s most respected authorities. Over the last twenty years he and co-author Martha Rogers have written a series of best-selling books on the subject, collectively selling over a million copies in 18 languages. Businessweek Magazine called one of their books “the bible of the new marketing,” Accenture listed Don among the “Top 100 Business Intellectuals,” and The Times of London listed him as one of the “Top 50 Business Brains.” In 2015 Don Peppers capped the list of “Top 25 Customer Experience Leaders” compiled by Satmetrix, based on factors including Klout score, LinkedIn presence, book sales, and “creation of an industry-changing methodology.” So if you’re looking for advice on how to think about, improve, and deliver a better customer experience, then this is the book for you. Organized as a series of short, easily digested and self-contained essays, it’s packed with concrete examples, suggestions, and inspiring ideas. Read it straight through, or snack on it as you like.

Boost profits, margins, and customer loyalty with more effective CRM strategy
Managing Customer Experience and Relationships, Third Edition positions the customer as central to long-term strategy, and provides essential guidance toward optimizing that relationship for the long haul. By gaining a deep understanding of this critical dynamic, you'll become better able to build and manage the customer base that drives revenue and generates higher margins. A practical framework for implementing the IDIC model merges theory, case studies, and strategic analysis to provide a ready blueprint for execution, and in-depth discussion of communication, metrics, analytics, and more allows you to optimize the relationship on both sides of the table. This new third edition includes updated examples, case studies, and references, alongside insightful contributions from global industry leaders to give you a well-rounded, broadly-applicable knowledge base and a more effective CRM strategy. Ancillary materials include a sample syllabus, PowerPoints, chapter questions, and a test bank, facilitating use in any classroom or training session.

How companies can stay competitive in a world of total transparency. With their first book, 1993's The One-to-One Future, Don Peppers and Martha Rogers introduced the idea of managing interactive customer relationships, long before the Web and social networking made it standard business practice. With Extreme Trust, they look to the future once again, predicting that rising levels of transparency will require companies to protect the interests of their customers and employees proactively, even when it sometimes costs money in the short term. The importance of this "trustability" will transform every industry. Retail banks won't be able to rely as much on overdraft charges. Consumers will expect retailers to remind them when they have unused balances on gift cards. Credit card companies will coach customers to avoid excessive borrowing. Cell phone providers will help customers find appropriate calling plans for their usage patterns. Success won't come from top-down rules and processes, but from bottom-up solutions on the part of employees and customers themselves. And the most successful businesses will earn and keep the extreme trust of everyone they interact with.

Rules to Break and Laws to Follow: How Your Business Can Beat the Crisis of Short-Termism

How empowered customers and employees can be great for your business When employees can leap tall hierarchies in a single click, it not only flattens their org chart, but also elevates the importance of your corporate culture, transforming it into a management tool and a competitive advantage. And when customers can share their experiences electronically with millions, customer trust becomes more than a catchphrase; it becomes a business necessity--and a divining rod for any company's success over the long term. Even change itself is no longer a constant; it is accelerating. No matter how great their product or service is today, tomorrow it will still be just another commodity, and tomorrow will come faster than it used to. Big or small, manufacturer or service firm, in today's technology-augmented business environment companies will have to know how to harness the power of their connected customers and networked employees. They need innovation, creativity, resilience, and leadership to produce not just quarterly numbers, but genuine shareholder value. This book provides them with the tools to get there.

Return on Customer: Creating Maximum Value From Your Scarcest Resource

Virtually every manager agrees that a company's most vital asset is its customer base - the lifetime values of all its current and future customers. Yet when companies track their financial results, they rarely take into account any change in the value of this critical asset. As a result, managers remain blind to one of the most significant factors driving genuine, lasting business success, and instead become preoccupied with achieving short-term financial goals. Return on Customer is the first book to focus on how firms create value, not just by driving current profits, but by preserving and increasing customer lifetime value.

The One to One Fieldbook

The One to One Fieldbook is the first hands-on manual for implementing customer relationship management programs, featuring step-by-step guidance on how to initiate, evaluate, and upgrade one-to-one initiatives. Among the topics covered in the book: how to determine whether you're ready to undertake a one-to-one program, how to evaluate what different customers are worth to your business, and how to customize your products or services. It includes chapters on gathering customer information, on how to measure results, on how to use the power of the World Wide Web--and much more. Each chapter features checklists of things to do, activities to enhance one-to-one skills, and questionnaires to evaluate your progress.

Life's A Pitch...Then You Buy

In Life's A Pitch... And Then You Buy, Don Peppers shows us how to craft a pitch that is guaranteed to simultaneously win the confidence (and business) of prospective clients and defeat the competition. Peppers's fail-safe system teaches mastery of three levels of the pitch: salesmanship, psychology, and game theory. Peppers believes that the strongest pitches appeal to a person's emotional makeup and the very subtle, extremely personal "hot buttons" that make each of us into feeling and thinking creatures. Peppers shows how you can design pitches that capture your clients' hearts and throw your competition off balance at the same time.