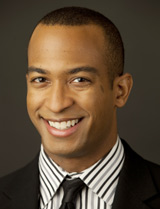 Dorian T. Warren is Associate Professor in the Department of Political Science, the School of International and Public Affairs, and the Institute for Research in African-American Studies at Columbia University. He is Co-Director of the Columbia University Program on Labor Law & Policy and also a Fellow at the Roosevelt Institute.

A native Chicagoan, Warren received his B.A. from the University of Illinois and his M.A. and Ph.D. from Yale University. He has taught at the Harris School of Public Policy at the University of Chicago, and has received research fellowships and grants from the Ford Foundation, CUNY’s Murphy Institute, the Public Welfare Foundation and the Russell Sage Foundation.

Warren has worked with several national and local organizations including the Leadership Conference on Civil and Human Rights, American Rights at Work/Jobs with Justice, AFL-CIO, CTW, UNITE-HERE, SEIU, UFCW, Steelworkers, and the NGLTF Policy Institute, among others. He currently serves on several boards including the Applied Research Center, Center for Community Change, ALIGN, the Model Alliance, Retail Action Project, the Discount Foundation and The Nation Magazine Editorial Board.

As a commentator on public affairs, Warren appears regularly on television and radio including NBC Nightly News, ABC, MSNBC, CNN, BET, BBC, NPR, Bloomberg, & NY1, among other outlets. In 2013, he was included on the list of NBC’s theGrio’s 100 people making history today.

He is the author of the forthcoming The Three Faces of Unions: Inclusion & Democracy in the U.S. Labor Movement (Oxford University Press), and (with Virginia Parks) Boxing Out: Race, Walmart & the Politics of Labor Market Regulation from Below (Russell Sage Foundation Press).