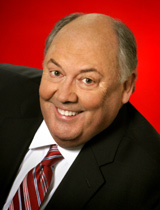 Carl spent several years as an educator in his native state. For eight years, he was a professor of education at Eastern Kentucky University and coordinated the university’s secondary education program.

Several years ago, faced with an increasing number of invitations to speak, Carl left his professorship to become a full-time speaker and entertainer.

Featured on what was formerly the Nashville Network, he has also made numerous appearances on the Bill Gaither Homecoming Series and Public Television. Carl holds the professional designation of Certified Speaking Professional and was inducted by his peers in to the National Speakers Association CPAE Speakers Hall of Fame. Carl’s humor is heard regularly on the XM Satellite Network on Channel 150 and the Sirius Satellite’s LAUGH FIRST Channel 105.

Perhaps he is most proud of being inducted into EKU’s Alumni Hall of Fame and receiving the institution’s honorary doctorate.

Carl believes that humor is the best carrier for his message. He has certainly earned the title of “America’s Funniest Professor.”