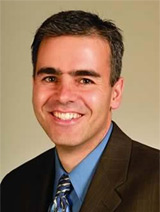 John D. Day, M.D. is a cardiologist specializing in the treatment of heart rhythm disorders. He is the Medical Director of Heart Rhythm Services at Intermountain Medical Center in Salt Lake City, a hospital system that President Obama has often praised as an “island of excellence that we need to make the standard in our healthcare system.”

Since 2004, Dr. Day has appeared as a health expert on all of the major television networks, providing valuable information about heart health and discussing developments in medicine. He has been a frequent guest on NBC, ABC, CBS and Fox affiliates.

Dr. Day engages in extensive research and the impact of his work has been remarkable. He was the principal investigator or co-investigator on three landmark studies in 2009, 2010 and 2011, involving thousands of patients. The first made a breakthrough connection between atrial fibrillation and Alzheimer’s, a devastating brain disease that affects more than 5 million Americans; the second demonstrated how a surgical procedure known as catheter ablation can reverse the risk of developing Alzheimer’s; and the third showed how toxic levels of Vitamin D can cause atrial fibrillation.

When these findings were unveiled, each study was picked up by the international media and stories appeared in more than 1,000 news outlets throughout the United States, Europe, Asia, the Middle East and even Africa.

Dr. Day is the prolific author of more than 100 articles that have been published in scientific and medical journals.

He is also the Editor-in-Chief of The Journal of Innovations in Cardiac Rhythm Management, the most widely subscribed-to journal in its field, and an Editor of Arrhythmia Grand Rounds, a new medical journal that will be launched later this year. He has contributed regularly as a cardiology expert to MedPage Today, a leading online news service for physicians as well.

Dr. Day has written five blogs for the Intermountain Healthcare Network since January, and each one led to an appearance on the network news media.

Dr. Day belongs to every major professional society for heart surgeons. He is on the Board of Trustees and currently serves as Second Vice President of the Heart Rhythm Society, an international non-profit organization with more than 6,000 physician members in more than 70 countries. In 2015, he will achieve the highest honor in his field when he becomes President of the Heart Rhythm Society.

His popularity as a presenter and keynote speaker is exemplified by an impressive list of honorariums. In 2005, he was the commencement speaker for the University of Utah School of Medicine graduation ceremony. He has given the keynote address at an annual sales meeting for Boston Scientific.

Dr. Day speaks Chinese fluently. His colleagues in China trust him, honor his message and continually invite him to share insights with them.

He has served as a visiting professor of cardiology at Dalian University in China and lectured at Stanford University, Albert Einstein College of Medicine, University of Minnesota. He was previously on the faculty of the University of Utah and won the Outstanding Faculty Teaching Award.

He is board certified in Internal Medicine, Cardiovascular Medicine and Cardiac Electrophysiology. He is a fellow of the American College of Cardiology and the Heart Rhythm Society.