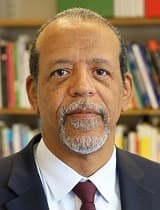 Ron Ferguson is an MIT-trained economist whose teaching and research for over 30 years at Harvard’s Kennedy School have focused on social and economic challenges, mainly in American cities.

Ron’s work during the 1980s and ‘90s culminated in the book Urban Problems and Community Development, Brookings Press (1999), an important text in graduate policy courses. However, even by the late 1980s, the value of academic skills was rising, causing growing wage gaps. Ron turned some of his attention toward education, where his writings on achievement gaps have appeared in publications of the National Research Council, the Brookings Institution, the U.S. Department of Education, and various books and journals, including his book, Toward Excellence with Equity: An emerging vision for closing the achievement gap, published by Harvard Education Press (2007). A February 2011 profile in the New York Times wrote, “There is no one in America who knows more about the gap that Ronald Ferguson.”

As a result, what began as the Boston Basics is now in more than 30 cities, towns, and counties around the nation, where partners are leading the work in their localities. This multi-city learning network is coordinated by a nonprofit organization, The Basics, Inc.

One of five brothers, Ron has always been curious about how parenting might contributed to how Harvard students and other outstanding people become smart and purposeful. In 2014, he and co-author Tatsha Robertson set out to investigate. The result is their new book published in February, 2019, entitled The Formula: Unlocking the Secrets to Raising Highly Successful Children.

Ron holds an undergraduate degree from Cornell University and a PhD from MIT, both in economics. He has been happily married for a long time and is the father of two adult sons.

Toward Excellence with Equity: An Emerging Vision for Closing the Achievement Gap

For the past 15 years, economist Ronald Ferguson has investigated the myriad factors that combine to create racial disparities in academic performance.

This book surveys what we currently know and what we need to know about community development's past, current, and potential contributions. The authors - economists, sociologists, political scientists, and a historian - define community development broadly to include all capacity building (including social, intellectual, physical, financial, and political assets) aimed at improving the quality of life in low-to-moderate-income neighborhoods. The book addresses the history of urban development strategies, the politics of resource allocation, business and work force development, housing, community development corporations, informal social organizations, schooling, and public security.