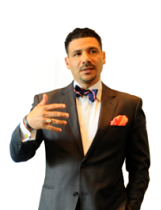 Steve Perry is one of the most sought after top speakers in education and advocacy in America.

Widely respected by grassroots community members and internationally renowned leaders, Dr. Steve Perry’s charismatic and compelling voice is an inspiration. He is the educator upon whom Oprah Winfrey, Sean “P-Diddy” Combs, Bishop T. D. Jakes, and Steve Harvey call to offer insight to parents and children. A diverse array of politicians and groups, from the National Urban League to ALEC, have reached out to Dr. Perry to better understand what matters to parents. Within the last 24 months, Dr. Perry has opened his fourth Capital Preparatory Schools in CT & NY, as well as assisted Steve Harvey in penning his new book, “Jump”, has spoken in over seventy-nine communities and completed his sixth book, “Transparenting”. Most recently, premiering his new daytime talk show “Breakthrough with Dr. Steve Perry”. As no stranger to television — Dr. Perry hosted another TVONE drama hit show “Save My Son,” a reality show that featured parents who wanted to keep their sons from becoming another disheartening statistic. His impact is profound and varied and displays no signs of slowing down. The word often used to describe Dr. Perry is “passionate”. His authenticity is a welcomed addition to any discussion rooted in improving the lives of youths and the community. His skills are hard-fought and have been bestowed by his difficult childhood all the way through his Ivy League school graduation. There is a richness in his concepts that foster an intriguing point of view on the modern American family.

Dr. Perry’s unique and powerful voice is respected and has been featured on multiple networks: MSNBC, Fox, CNN, Al Jazeera, TV One, BET, and NBC as well as the Oprah Winfrey Network (OWN). His courage and piercing insights provide a fascinating perspective that is seldom found in public discourse. Dr. Perry fearlessly speaks from the heart, which births unpredictability. He’s the voice of a generation, a people’s champion who has been fighting for disadvantaged children and families for thirty years. Passionate and surprisingly funny, Dr. Steve Perry is a man who is worthy of a listen.

Push Has Come to Shove: Getting Our Kids the Education They Deserve--Even If It Means Picking a Fight

"Have you been to a school lately? Have you sat through the six hours and forty-five minutes of excruciating tedium we send our kids to every day? When we ask our kids, "What'd you do in school today?" and they mumble, "Nothin'," they're telling the truth." Steve Perry is like no other educator you've ever met. He "gets it." He understands why some parents are downright panicked about what's going on in their kids' classrooms, and how other parents, whose kids supposedly attend the "good" schools, still fear that their children are falling behind. As Principal of one of the best performing schools in America -- one that sends 100% of its mostly minority students to four-year colleges -- Perry delights in poking the system. Present him with a "truth" about how education is supposed to work and - count on it - he'll show it to be false. If you're a parent who has worried recently about how depressed your child seems when he dresses for school in the morning...or how little of what happens during the school day seems to sink into her brain... or how much of your child's homework is busywork, you need this book. If you're a teacher who is putting your heart and soul into the job but are surrounded by colleagues who are "phoning it in," you need this book. If you're a committed, forward-thinking principal who wants to get rid of the faculty bad apples, but are continually stymied by Mafia-style teachers-unions, you need this book. *If you're a citizen who worries about the $1 trillion-plus GDP loss that America suffers every year because our system of education doesn't measure up, you need this book. In this solution-oriented manifesto, Steve Perry covers the full range of issues holding back today's students. He shows parents how to find great teachers (and get rid of the bad ones)...how to make readers out of kids who hate to read...how to make the school curriculum thrilling rather than sleep-inducing…how to conduct an all-important education "home audit"... how to "e-organize" if school boards and administrators aren't getting the message...how to build a "school of the future," and much more. The era of third-rate education is over. Steve Perry isn't going to let the fools and scoundrels get away with it any longer. Push has come to shove!

Steve Perry is thought provoking in his novel, The Window Pain. He captures the essence and power of a decision. He also explores falling in and out of love and then wraps it in 1980s Philadelphia. Served over smoldering emotions and self-discovery, the author's lyrical cadence makes the book a literary delight. The story twists and turns, beginning as Tarique grows out from under the yoke of domestic violence. While it moves through Tarique and Shandell's coming of age, it clutches tightly to reality. Hindsight is injected to explain why Bria falls in love with Tarique, but it is too late to prepare us for the surprises that await us in every chapter. With one more masterful twist, it halts, leaving us wondering how we got there.

Man Up! Nobody is Coming to Save Us

Man Up! is a hard hitting, hig, introspective look into what the Black community must do to save itself. Finally, a voice speaks to the complex relationship between personal and community responsibility. Steve Perry effectively calls to task organizations such as the NAACP and the Black church as well as talking heads like Michael Eric Dyson and Cornell West for their role in the retardation of the Black community. Ultimately Man Up! is about the simple solutions offered in each chapter.