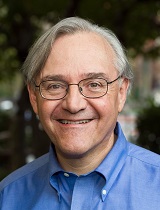 Syndicated Washington Post columnist and NPR commentator E.J. Dionne Jr. is author of several books that are essential to understanding the 2016 election and the road ahead, including One Nation Under Trump, Why The Right Went Wrong, and Our Divided Political Heart.

Widely admired for his insights into the alarming polarization of our national politics, Dionne regularly debates David Brooks of the New York Times on NPR and appears frequently on ABC’s This Week with George Stephanopoulos and MSNBC. Other books include Souled Out: Reclaiming Faith & Politics After the Religious Right, Stand Up, Fight Back: Republican Toughs, Democratic Wimps, and the Politics of Revenge , and They Only Look Dead: Why Progressives Will Dominate The Next Political Era.

Dionne began his now twice-weekly op-ed column for The Washington Post in 1993, and he now appears in more than 100 newspapers in the United States and abroad. Before joining The Post in 1990 as a reporter covering national politics, he spent 14 years with The New York Times, reporting on state and local government, national politics, and from around the world, including stints in Paris, Rome and Beirut.

One Nation After Trump: A Guide for the Perplexed, the Disillusioned, the Desperate, and the Not-Yet Deported

A call to action from three of Washington's premier political scholar-journalists, One Nation After Trump offers the definitive work on the threat posed by the Trump presidency and how to counter it.

Why the Right Went Wrong: Conservatism--From Goldwater to Trump and Beyond

From the author of Why Americans Hate Politics, the New York Times bestselling and “notably fair-minded” (The New York Times Book Review), story of the GOP’s fracturing—from the 1964 Goldwater takeover to the Trump spectacle.

Our Divided Political Heart: The Battle for the American Idea in an Age of Discontent

Dionne places our current quarrels in the long-standing tradition of struggle between two core values: the love of individualism and our reverence for community. Both make us who we are, and to ignore either one is to distort our national character. He sees the current Tea Party as a representation of hyper-individualism, and takes on their agenda-serving distortions of history, from the Revolution to the Civil War and the constitutional role of government. Tea Partiers have reacted fiercely to President Obama, who seeks to restore a communitarian balance - a cause in American liberalism which Dionne traces through recent decades.

Souled Out: Reclaiming Faith and Politics after the Religious Right

The religious and political winds are changing. Tens of millions of religious Americans are reclaiming faith from those who would abuse it for narrow, partisan, and ideological purposes. And more and more secular Americans are discovering common ground with believers on the great issues of social justice, peace, and the environment. In Souled Out, award-winning journalist and commentator E. J. Dionne explains why the era of the Religious Right--and the crude exploitation of faith for political advantage--is over.

In this new edition of his national bestseller, E. J. Dionne brings up to date his influential proposals for a politics that can and must find a balance between rights and obligations, between responsibility and compassion.

From the New, Updated Introduction:
"At the heart of Why Americans Hate Politics is the view that ideas shape politics far more than most accounts of public life usually allow. I believe ideas matter not only to elites and intellectuals, but also to rank and file voters. Indeed, I often think that the rank and file see the importance of ideas more clearly than the elites, who often find themselves surprised by the rise of the movements that arise from the bottom up and shape our politics."