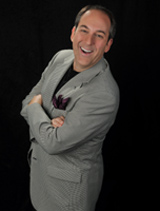 Let it be known that Giovanni found his “passion path” in life when he was seven years old and performed his first paid magic experience at the age of 10.

While in his early twenties, he produced and performed an entertainment concept for the Orlando Magic NBA franchise that filled the stands with fans and established him as both a superior showman and innovative entrepreneur.

Today, Giovanni’s unparalleled ability to motivate and transform people and organizations has made him one of the most sought-after corporate entertainers in America, and his spectacular message has electrified over half of the country’s Fortune 500 companies.

In addition to his latest printed experience, Live A Thousand Years, Giovanni has authored three books and was recently inducted to the prestigious National Speaker’s Hall Of Fame. He is also only one of five people in history to have received the coveted Gold Cups Award by the International Brotherhood of Magicians. Giovanni has been creating meaningful experiences for audiences of all sizes for more than two decades. He invites you now to join the experience.

For many people, the past imposes limitations on who they are in the present. For Giovanni Livera, his heritage is the foundation for who he is today and the legacy he is creating for future generations.

So who – or more appropriately, what – is Giovanni?

Above all else, he is a celebrator of human spirit and human potential – a creator of meaningful experiences that transform people’s lives through the understanding that anything is possible.

He is a revealer of secrets – the wizard who, if asked, will show you how it is possible to live a thousand years by living each hour of your life to its very fullest.

He is an American entrepreneur whose achievements inspire others to achieve. Giovanni is at once a performer and a presenter, enthusiast and entertainer, magician and motivator.

At best, Giovanni can only be described – he cannot be defined, because he is unlike anything you have ever experienced. Try imagining a color you have never seen before.

From past generations, Giovanni has inherited a profound respect for the power of individuals to create their own future. His unparalleled showmanship evokes the magnificence and grandeur of P.T. Barnum; his imagination, wonder and dramatic use of invention are reminiscent of Walt Disney; and his irresistible humor, contagious laughter and ability to connect with audiences on a personal level are suggestive of the levity and intimate sincerity of Red Skelton. It is from the contributions and legacies of performers like these that Giovanni is creating a legacy for future generations to draw from.

It is only appropriate that Giovanni’s heritage is Italian, for during the Italian Renaissance of centuries ago mankind emerged from the Dark Ages and envisioned a world of limitless possibilities. Giovanni is emergence, enlightenment, inspiration and celebration. He invites you to see the world as never before.

Prepare yourself for a literary joyride as you look at all the tricks you never dreamed of doing or thought possible with cigars, cigar bands, lighters, matches, matchboxes, cigar boxes, cigar ash and smoke! This book is a collection of the best-of-the-best stunts--from the simplest to the most challenging. This book is for everyone.

The Amazing Dad: More than 400 Ways to Wow the Kids

You are a father. You are the most important man on the planet. You are the maker of moments. . . the creator of memories. . . the ultimate hero in the eyes of your child! You are THE AMAZING DAD! This fun and fully-illustrated source book presents hundreds of games, gags, crafts, and tricks that will astonish and enchant children of all ages. The definitive guide for today's busy father, it shares hundreds of astounding secrets, providing dad with powers beyond his kid's wildest dreams. * Build volcanoes! * Defy gravity! * Find treasures! * Grant wishes! * Produce rainbows! * Read minds! * Create an endless supply of Wonder and Laughter! Leave a Legacy! Be a hero! Become The Amazing Dad!

Live a Thousand Years: Have the Time of Your Life

This captivating story teaches you how to live twelve times the life experience of the average person. Most of us measure our time by clocks and calendars. Live A Thousand Years reveals the power of measuring your time and your success by moments and experiences.