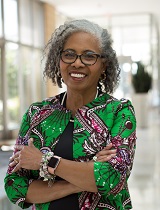 Gloria Ladson-Billings is Professor Emerita and former Kellner Family Distinguished Professor in Urban Education in the Department of Curriculum & Instruction and was Faculty Affiliate in the Departments of Educational Policy Studies, Educational Leadership & Policy Analysis and Afro American Studies at the University of Wisconsin-Madison. She is the current President of the National Academy of Education. She was the 2005–2006 president of the American Educational Research Association. Ladson-Billings’ research examines the pedagogical practices of teachers who are successful with African American students. She also investigates Critical Race Theory applications to education.

Ladson-Billings is the author of the critically acclaimed books, The Dreamkeepers: Successful Teachers of African American Children, Crossing over to Canaan: The Journey of New Teachers in Diverse Classrooms, and Beyond the Big House: African American Educators on Teacher Education. She is editor of 6 other books and author of more than 100 journal articles and book chapters. She is the former editor of the American Educational Research Journal and a member of several editorial boards. Her work has won numerous scholarly awards, including the H. I. Romnes Faculty Fellowship, Spencer Post-doctoral Fellowship, and the Palmer O. Johnson outstanding research award. She is the 2015 winner of the Social Justice in Education Award given by the American Educational Research Association. She was named the 2012 winner of the Brock International Prize in education. In 2012 she was awarded an honorary degree from the University of Alicante, Alicante, Spain. In 2010 she was awarded an honorary degree from the University of Massachusetts – Lowell. In 2002 she was awarded an honorary doctorate from Umeå University, Umeå, Sweden. During the 2003–2004 academic year she was a fellow at the Center for Advanced Study in the Behavioral Sciences, Stanford, California. In fall 2004 she received the George and Louise Spindler Award from the Council on Anthropology and Education for significant and ongoing contributions to the field of educational anthropology. In spring 2005 she was elected to the National Academy of Education and the National Society for the Study of Education. In 2007 she was awarded the Hilldale Award, the highest faculty honor given to a professor at the University of Wisconsin for outstanding research, teaching, and service. She is a 2008 recipient of the state of Wisconsin’s Martin Luther King, Jr. Heritage Award and the Teachers College, Columbia University 2008 Distinguished Service Medal. In 2009 she was elected to Kappa Delta Pi International Education Honor Society’s Laureate Chapter—comprised of 60 living distinguished scholars. Former laureate members include notables such as Albert Einstein, John Dewey and Eleanor Roosevelt. Ladson-Billings is currently one of the NEA Foundation Fellows charged with providing advice on its “Achievement Gap Initiative.” In 2014 she was a panelist on the White House’s African American Educational Excellence Initiative’s Essence Festival, “Smart Starts at Home” panel. In 2015 she received the Distinguished Lifetime Achievement Award from the Literacy Research Association. In 2016 she received the Lifetime Achievement Award from the Benjamin Banneker Association of the National Council for Teachers of Mathematics. In Fall 2017 she received the John Nisbet Award from the British Educational Research Association at the University of Sussex in Brighton, England. In April 2018 she received the American Educational Research Association’s Distinguished Research Award and the Division B (Curriculum Studies) Lifetime Achievement Award. She was elected to the American Academy of Arts & Sciences in Spring 2018.

Ladson-Billings has an active community life that includes serving on several community boards such as the Urban League of Greater Madison, The Madison Children’s Museum, the United Way of Dane County, and the Susan G. Komen for the Cure of Madison. She is a member of the Links, Inc. and a 50-year member of Alpha Kappa Alpha Sorority, Inc. At the 2017 Leadership Summit she was named the Omega Psi Phi Fraternity, Inc. International Citizen of the Year. As an active member of the Mt. Zion Baptist Church of Madison, WI she is the 2nd woman named to the 108 year old church’s Board of Deacons.

Crossing Over to Canaan: The Journey of New Teachers in Diverse Classrooms

Crossing Over to Canaan tells the story of eight novice teachers working in urban, elementary school settings. It details their struggles and triumphs as they confront challenges in the classroom and respond with innovative strategies that turn cultural strengths into academic assets. Gloria Ladson-Billings offers a model of teaching that focuses on academic achievement, cultural competence, and socio-political consciousness. Drawing from her own experiences as a young African-American teacher working in Philadelphia, she successfully weaves together narrative, observation, and scholarship to create an inspirational and practical book that will help teachers everywhere as they work to transcend labels and categories to support excellence among all students.

Gloria Ladson-Billings and William F. Tate argue that education scholars can and must undertake work that speaks to the pressing public issues related to education. In this volume, they are joined by renowned educators who have a reputation for engaging public interests and public policy in powerful and provocative ways. Together, they address such important issues as zero-tolerance policies, language-minority students, multicultural education, school reform, teaching for social justice, educational inquiry, curriculum, assessment, and much more. This compelling collection challenges policymakers and the public to take a greater hand in creating a quality education for all students.

Education, like electricity, needs a conduit, a teacher, through which to transmit its power-- i.e., the discovery and continuity of information, knowledge, wisdom, experience, and culture. Through the stories and experiences of eight successful teacher-transmitters, The Dreamkeepers keeps hope alive for educating young African Americans.