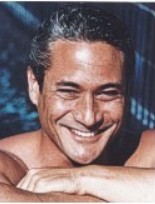 Greg Louganis began competing in diving at age 10. By 16, he had won his first Olympic medal, a silver medal on the platform in 1976. At 24, he became the first man in 56 years to win two gold medals in diving by winning both the platform and springboard events. In 1988, competing against divers half his age, Greg Louganis became the first to win double gold medals for diving in two consecutive Olympics.

His diving accomplishments do not stop there. Greg Louganis is a six time World Champion and has held 47 National Championship titles. At the Pan Am Games he earned six gold medals and in 1985 he was awarded the Sullivan Award as the nation’s most outstanding amateur athlete.

Greg Louganis is clearly the world’s greatest diver and a fine athlete. At the 1988 Olympic Games he was awarded the Maxwell House/United States Olympic Committee Spirit Award as the Olympic athlete who had best exhibited the ideals of the Olympic spirit, demonstrated extraordinary courage and contributed significantly to the sport.

Greg Louganis is more than just an Olympic Champion – he stands out as a remarkable human being who has led an exceptional life. He exhibited sheer grace and a winning style as the world’s greatest diver, but behind his professional achievements, Greg Louganis was battling a number of personal difficulties.

Greg Louganis‘ best-selling autobiography, Breaking the Surface, is a behind-the-scenes account of a man struggling with far more than just striving to be a great athlete. For years, Greg Louganis‘ cheerful public persona covered up the personal troubles he has had to overcome – his HIV diagnosis, coming out as a gay man, domestic violence, substance abuse and dyslexia. Greg Louganis has optimistically confronted all of these challenges and has honestly shared his hardships with people everywhere.

Outside of diving, Greg Louganis also exhibited his broadcasting talent when he co-hosted segments on Good Morning America during the Atlanta Olympics, a first for an openly gay athlete. His video, Looking to the Light, a feature length visual diary of his life after Breaking the Surface, details how his story has influenced so many people. Greg Louganis‘s recent book, For the Life of Your Dog, is about the challenges and joys of living with and caring for dogs, one of his favorite pursuits.

Today, Greg Louganis speaks out on the obstacles he has overcome with a warmth and grace that embody the Olympic spirit. A popular speaker for universities, community associations, health care organizations and corporate groups, Greg Louganis‘ honest message of acceptance and understanding has inspired millions around the world.

Born to a young Samoan father and Northern European mother, and adopted at nine months, Greg began diving at age nine, and at sixteen won a silver medal at the 1976 Montreal Olympics. But despite his astonishing athletic skill, Greg struggled with late-detected dyslexia, prejudice toward his dark skin coloring and anguish over his homosexuality, which he felt compelled to hide. Being in the spotlight intensified his difficulties with relationships and substance abuse. However, Louganis went on to win double gold medals at the 1984 and 1988 Olympics. His triumph at the 1988 Olympics came several months after he tested positive for HIV. This is the haunting, searingly candid story of the world's greatest diver. This new edition includes a new foreword.

For the Life of Your Dog: A Complete Guide to Having a Dog From Adoption and Birth Through Sickness and Health

In his #1 New York Times bestselling autobiography Breaking the Surface, Greg Louganis included loving portrayals of his protectors and closest friends: his dogs. Now Greg, a breeder and trainer of Harlequin Great Danes, has teamed up with award-winning animal writer Betsy Sikora Siino to create an extraordinary guide to dog ownership. Greg's distinctive philosophy and practical tips -- hich have produced his best-in-breed winners -- illuminate every page of this special volume that puts the dog's best interests first. Here are insights into choosing a dog, basic care, training, exercise, and nutrition -- and an overview of every stage of a dog's life. Passionate in his opinions and wonderfully effective, Greg includes: - Cures for chewing, barking, biting, and other so-called behavior problems Answers to the great housetraining disputes -- including the pros and cons of crating - Specific feeding programs for optimal nutrition -- and for combating the greatest health threat to your dog: obesity - An exercise program for the canine athlete (and they're all athletes!) - Training tips for obedience, showing, and search-and-rescue - Preventive medicine, common illnesses from nose to tail, and age-related concerns - Advice on breeding, whelping, adopting your second (third, fourth...) dog, and more! For The Life of Your Dog is an inspiring and eye-opening reference. Delivered with Greg's delightful candor, his sound advice makes it a classic for new and long-time dog owners -- and anyone who has ever loved a dog.