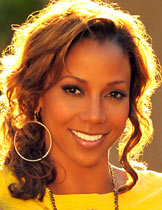 Actress, author, talkshow host, activist and philanthropist, Holly Robinson Peete has been touched by the entertainment industry all of her life. Holly Robinson Peete‘s career as an actress dates back more than two decades and has led her to becoming a voice for her father, her son and her community.

Robinson Peete just recently completed a successful season as one of the original co-hosts of the new CBS daily talk show The Talk, which premiered in October 2010. The Talk came on the heels of the enormous success Robinson Peete had on the third season of NBC’s Celebrity Apprentice. Making it all the way to the final episode, Robinson Peete was the runner up and set a fundraising record for her charity HollyRod Foundation. Through her emotional appearance on the show, she shed a national light on a cause very personal to the Peete Family: autism.

In 1996, Robinson Peete and her husband, former NFL quarterback Rodney Peete, formed the HollyRod Foundation, inspired by her father’s courageous battle with Parkinson’s disease, with the mission to help improve the quality of life of people with Parkinson’s. Then in 2005, inspired by their oldest son’s autism diagnosis, HollyRod Foundation’s mission expanded to provide access to treatment, support and other resources to disenfranchised families affected by autism. Through HollyRod Foundation and her family’s personal experiences, Robinson Peete has become an advocate for consistent and reliable education, outreach and support on both Parkinson’s and autism.

Her autism advocacy also extends to her book with daughter, Ryan Elizabeth Peete. In 2010, Robinson Peete released her second book, an Image award winning children’s picture book about autism from the sibling’s perspective, co-authored by 12-year-old Elizabeth Peete, entitled My Brother Charlie (Scholastic). With her first book Get Your Own Damn Beer, I’m Watching the Game: A Women’s Guide to Loving Pro Football (2005, Rodale), Robinson Peete won the 2006 Quill Literacy Award. A third book, another Scholastic children’s title, is due out in 2012.

Robinson Peete‘s longevity and visibility in the entertainment community has led her to a successful career as a spokesperson for some of the country’s biggest brands. In 2010 Robinson Peete‘s consumer friendly personal brand partnered with Target, ToysRUs, Colgate , Skechers, Epipen and TJ Maxx, among others.

Robinson Peete had her first experience in front of the camera at the age of four when she appeared on television opposite her father Matthew Robinson, who served as a producer and portrayed the original beloved character of “Gordon,” on the award-winning children’s program “Sesame Street.” While she knew even at that young age her calling was to be an actress, Robinson Peete opted to lead a typical childhood rather than searching to be the next child star.

However, upon finishing her college education, Robinson Peete‘s heart led her back to entertainment. In 1986, she landed a starring role on the FOX television drama “21 Jump Street” opposite unknown cast members including Johnny Depp. She went on to star in many other successful television series including “Hangin’ With Mr. Cooper,” “For Your Love,” and “One on One.” Robinson Peete‘s successful television career places her as one of only a handful of actresses to star in four shows in syndication. In addition, she also recently starred in the original Lifetime movie “Matters of Life & Dating” for which she was nominated for an NAACP Image Award.

Robinson Peete‘s singing talents have been displayed on theme songs for both “21 Jump Street” and “Hangin’ With Mr. Cooper,” and she also did her own signing as Diana Ross in the miniseries “The Jacksons: An American Dream.” Robinson Peete says fondly that singing is her “first love and passion.”

In late 2008, Robinson Peete wrapped a successful run as an on-air personality alongside her husband Rodney on their daily radio program “Meet the Peetes.” Airing on the Oprah & Friends network on Sirius/XM Satellite Radio, “Meet the Peetes” captured the reality of two working parents raising their four children, balancing their careers and being activists and advocates on issues that affect their lives. The Peete’s were able to effectively balance issues, fun and family in a way only two people who have been married for 16 years can.

In addition to the HollyRod Foundation, Robinson Peete currently serves as a member of the board of Autism Speaks, The Greater Los Angeles Zoo Association (LA Zoo) and the Keck School of Medicine.

Born in Philadelphia and raised in Los Angeles from the age of nine, Robinson Peete was voted “most talented” in high school alongside fellow classmate and future actor Rob Lowe. She did her undergraduate studies at the prestigious Sarah Lawrence College where she majored in Psychology and French. She spent her junior year studying abroad at Sorbonne University in France and became fluent in the language.

Robinson Peete and husband of 16 years Rodney Peete are the proud parents of four children. They currently reside in Los Angeles.

From bestselling author and actress Holly Robinson Peete--a heartwarming story about a boy who happens to be autistic, based on Holly's son, who has autism. "Charlie has autism. His brain works in a special way. It's harder for him to make friends. Or show his true feelings. Or stay safe." But as his big sister tells us, for everything that Charlie can't do well, there are plenty more things that he's good at. He knows the names of all the American presidents. He knows stuff about airplanes. And he can even play the piano better than anyone he knows. Actress and national autism spokesperson Holly Robinson Peete collaborates with her daughter on this book based on Holly's 10-year-old son, who has autism.