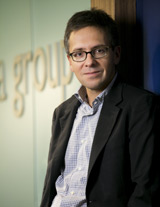 Ian Bremmer is the president and founder of Eurasia Group, the leading global political risk research and consulting firm. He is a prolific thought leader and author, regularly expressing his views on political issues in public speeches, television appearances and top publications. Dubbed the “rising guru” in the field of political risk by The Economist, he teaches classes on the discipline as Global Research Professor at New York University.

In 1998, Bremmer established Eurasia Group with just $25,000. Today, the company has offices in New York, Washington and London, as well as a network of experts and resources in 90 countries. Eurasia Group provides analysis and expertise on how political developments and national security dynamics move markets and shape investments across the globe.

Bremmer is credited with bringing the craft of political risk to financial markets-he created Wall Street’s first global political risk index (GPRI)-and for establishing political risk as an academic discipline. His definition of emerging markets-“those countries where politics matter at least as much as economics for market outcomes”-has become an industry standard. ‘G-Zero,’ his term for a global power vacuum in which no country is willing and able to set the international agenda, is widely accepted by policymakers and thought leaders. Said Larry Summers, “Global political economy has no sharper or more prescient analyst than Ian Bremmer.”

Bremmer actively discusses the intersection between politics and markets in speeches and the media. He has published nine books including the national bestsellers “Every Nation for Itself: Winners and Losers in a G-Zero World” and “The End of the Free Market: Who Wins the War Between States and Corporations?” He is a regular columnist for Reuters and the Financial Times A-List, and has written hundreds of articles for many leading publications. He appears regularly on CNBC, Fox, Bloomberg, CNN, the BBC, and other networks.

Bremmer earned a PhD in political science from Stanford University in 1994 and was the youngest-ever national fellow at the Hoover Institution. In 2007, Bremmer was named a Young Global Leader of the World Economic Forum, where he is the founding chairman of the Global Agenda Council on Geopolitical Risk. He is a Senior Fellow at the World Policy Institute and serves on the President’s Council of the Near East Foundation, the Leadership Council for Concordia and the Board of Trustees of Intelligence Squared.

Bremmer grew up in Boston and currently lives in New York and Washington.

The End of the Free Market: Who Wins the War Between States and Corporations?

Understanding the rise of state capitalism and its threat to global free markets The End of the Free Market details the growing phenomenon of state capitalism, a system in which governments drive local economies through ownership of market-dominant companies and large pools of excess capital, using them for political gain. This trend threatens America's competitive edge and the conduct of free markets everywhere. An expert on the intersection of economics and politics, Ian Bremmer has followed the rise of state-owned firms in China, Russia, the Arab states of the Persian Gulf, Iran, Venezuela, and elsewhere. He demonstrates the growing challenge that state capitalism will pose for the entire global economy. Among the questions addressed: Are we on the brink of a new kind of Cold War, one that pits competing economic systems in a battle for dominance? Can free market countries compete with state capitalist powerhouses over relations with countries that have elements of both systems-like India, Brazil, and Mexico? Does state capitalism have staying power? This guide to the next big global economic trend includes useful insights for investors, business leaders, policymakers, and anyone who wants to understand important emerging changes in international politics and the global economy.

The Fat Tail: The Power of Political Knowledge for Strategic Investing

In recent years, investors have learned the hard truth that in the international economy, politics often matters at least as much as economic fundamentals for the performance of global markets. Too many companies and investors haven't yet learned to read the warning signs: their expertise lies much more in economics than politics, and the temptation is to hope that highly volatile situations such as the 2008 Georgia-Russia confrontation will be few and far between. But as Ian Bremmer and Preston Keat demonstrate, these scenarios--and their catastrophic effects on business--happen much more frequently than we imagine. On the curve that charts both the frequency of these events and the power of their impact, the 'tail' of extreme political instability is not reassuringly thin but dangerously fat. This groundbreaking book is the first to both identify the wide range of political risks that global firms face and show investors how to effectively manage them. Written by two of the world's leading figures in political risk management, it reveals that while the world remains exceedingly risky for businesses, it is by no means incomprehensible. Political risk is unpredictable, but it is easier to analyze and manage than most people think. Applying the lessons of world history, Bremmer and Keat survey a vast range of contemporary risky situations, from stable markets like the United States or Japan, where politically driven regulation can still dramatically effect business, to more precarious places like Iran, China, Russia, Turkey, Mexico, and Nigeria, where private property is less secure and energy politics sparks constant volatility. The book sheds light on a wide array of political risks--risks that stem from great power rivalries, terrorist groups, government takeover of private property, weak leaders and internal strife, and even the "black swans" that defy prediction. But more importantly, the authors provide a wealth of unique methods, tools, and concepts to help corporations, money managers, and policy makers understand political risk, showing when and how political risk analysis works--and when it does not. Authored by Ian Bremmer (author of the bestselling The J-Curve) and Preston Keat, the president and research director (respectively) of Eurasia Group, the world's leading political risk consultancy firm, The Fat Tail is an indispensable guide for anyone involved in the international economy.

The J Curve: A New Way to Understand Why Nations Rise and Fall

What Freakonomics does for understanding the economy, The J Curve does for better understanding how nations behave. Bremmer's tour of the nations of the world -- our friends, our foes, and others in between -- shows us how to see the world fresh, get rid of shopworn attitudes, and discover a new and useful way of thinking.

Every Nation for Itself: Winners and Losers in a G-Zero World

G-Zero - JEE-ZEER-oh -n A world order in which no single country or durable alliance of countries can meet the challenges of global leadership. What happens when the G20 doesn't work and the G7 is history. If the worst threatened-a rogue nuclear state with a horrible surprise, a global health crisis, the collapse of financial institutions from New York to Shang­hai and Mumbai-where would the world look for leadership? The United States, with its paralyzed politics and battered balance sheet? A European Union reeling from self-inflicted wounds? China's "people's democracy"? Perhaps Brazil, Turkey, or India, the geopolitical Rookies of the Year? Or some grand coalition of survivors, the last nations stand­ing after half a decade of recession-induced turmoil? How about none of the above? For the first time in seven decades, there is no single power or alliance of powers ready to take on the challenges of global leadership. A generation ago, the United States, Europe, and Japan were the world's powerhouses, the free-market democracies that propelled the global economy forward. Today, they struggle just to find their footing. Acclaimed geopolitical analyst Ian Bremmer argues that the world is facing a leadership vacuum. The diverse political and economic values of the G20 have produced global gridlock. Now that so many challenges transcend borders-from the stability of the global economy and climate change to cyber-attacks, terrorism, and the security of food and water-the need for international cooperation has never been greater. A lack of global leadership will provoke uncertainty, volatility, competition, and, in some cases, open conflict. Bremmer explains the risk that the world will become a series of gated commu­nities as power is regionalized instead of globalized. In the generation to come, negotiations on economic and trade issues are likely to be just as fraught as recent debates over nuclear nonproliferation and climate change. Disaster, thankfully, is never assured, and Brem­mer details where the levers of power can still be found and how to exercise them for the common good. That's important, because the one certainty of weakened nations and enfeebled institutions is that someone will try to take advantage of them. Every Nation for Itself offers essential insights for anyone attempting to navigate the new global play­ing field.

Superpower: Three Choices for America's Role in the World

America will remain the world's only superpower for the foreseeable future. But what sort of superpower? What role should America play in the world? What role do you want America to play? Ian Bremmer argues that Washington's directionless foreign policy has become prohibitively expensive and increasingly dangerous. Since the end of the Cold War, U.S. policymakers have stumbled from crisis to crisis in Afghanistan, Iraq, Iran, Libya, Syria, and Ukraine without a clear strategy. Ordinary Americans too often base their foreign policy choices on allegiance or opposition to the party in power. We can no longer afford this complacency, especially now that both parties are deeply divided about America's role in the world. The next presidential election could easily pit an interventionist Democrat against an isolationist Republican-or the exact opposite.