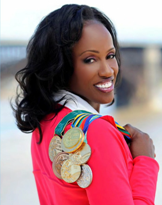 Jackie Joyner-Kersee is considered one of the greatest athletes of all time. Sports Illustrated for Women voted Jackie Female Athlete of the 20th Century and ESPN named her one of the 50 Greatest Athletes. She received these honors by becoming the first woman to win back-to-back gold medals in the seven disciplined event, heptathlon, the first woman to score 7,000 points in the heptathlon, and the first American woman to win an Olympic gold medal in the long jump, all on her way to winning 6 Olympic Medals (3 gold, 1 silver and 2 bronze) in 4 consecutive Olympic Games.

Off the track, Jackie Joyner-Kersee always determined to give back, she continues to keep her personal promise to be a contributing citizen of the metropolitan East and St. Louis community. Her world class philanthropic deeds are praised worldwide. She has amazed everyone and disappointed no one, as she works to enhance the lives of children worldwide; champions the causes of asthma awareness, education and healthy lifestyles.

Jackie Joyner-Kersee’s commitment to causes she supports has prompted her to serve on various board committees dedicated the enriching, teaching and empowering lives. These include Nike’s All-American Camp and Co-Chair w/ Michael Jordan, Nike’s P.L.A.Y.(Participate in the Lives of America’s Youth) Program, Women’s Health Initiative Program, America Belongs to our Children. She was the first woman to serve as President of the St. Louis Sports Commission, focusing a special emphasis on grass root programs. Jackie Joyner-Kersee has served on President’s Council on Physical Fitness & Sports and her work garnered the honor of being inducted in the Boys & Girls Club of America Hall of Fame. In 2007 Jackie received the National Urban League’s Women of Power Award. She was also awarded the International Olympic Committee’s (IOC) highest honor as a recipient of the IOC Women and Sport Trophy. She received this honor for her active role in the advancement of girls through sports. Her compassion and commitment to helping others remains unwavering as she simply states, “Giving is a kind of grace.”

The author of two books, “A Woman’s Place is Everywhere” and her autobiography, “A Kind of Grace,” Jackie Joyner-Kersee is continuously traveling the country as a motivational speaker, bringing awareness to causes and initiatives she is passionate about and working to involve more corporations, sponsors, and community groups in advancing her Foundation’s programs and initiatives worldwide.